Not only are the volcanoes hot in this part of the world, cycling in the midday sun can be one hot sweaty experience. However early starts and some rest days off has made a good balance and  given us plenty of time to relax and explore. We have made it down to Costa Rica and head to the Nicoya peninsula where we meet up with Lorely´s brother.

‘The Bike Yard’ in Leon for all your cycle touring needs!!

Leon, we really enjoyed it here. It is a great colonial town that grew on us over the 4 days we spent wandering around and exploring. With lovely cheap eateries and good people watching in the shady square. We also met the Spanish cyclists that we were originally told about back in Washington USA, 6 months ago. 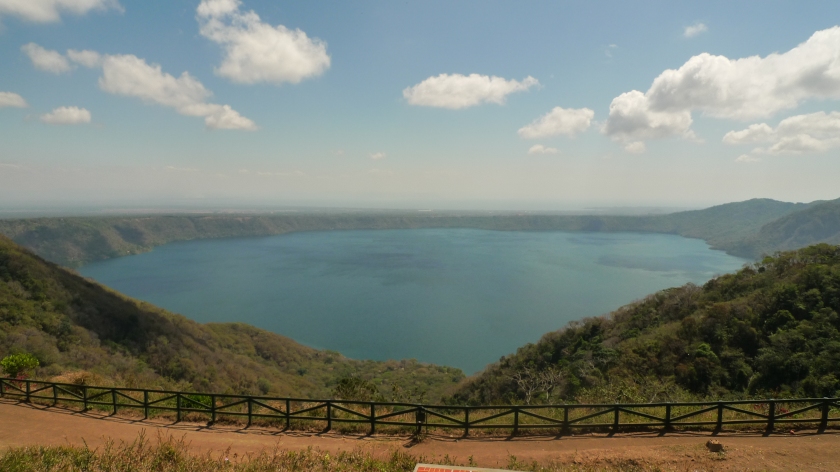 Laguna de Apoyo, very tempting for a swim but the very steep cycle back up put us off.

You are never far away from fresh fruit in Central America.

A view over the tiled roofs of Granada, Nicaragua. 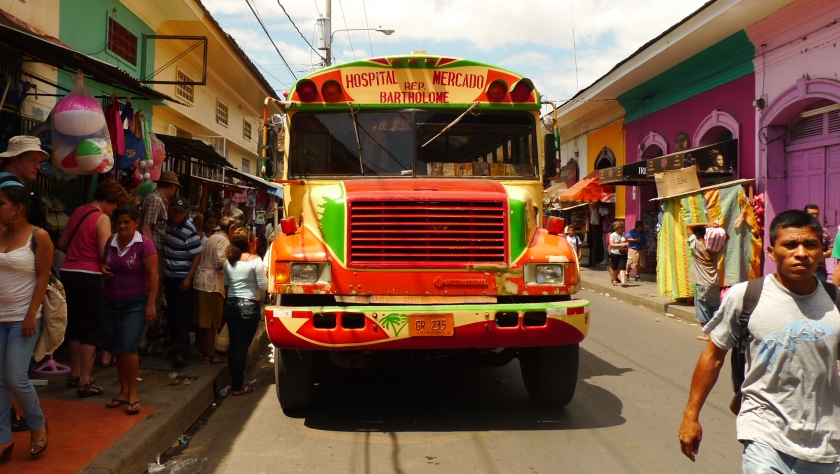 The colourful market of Granada.

Iglesia de Guadalupe, more church pictures, however they are such a big feature here, from the beautiful ones in the cities to the little simple ones in the villages. Cycling on Sundays we always see people dressed up for church, then it seems the afternoons are spent in the bar! 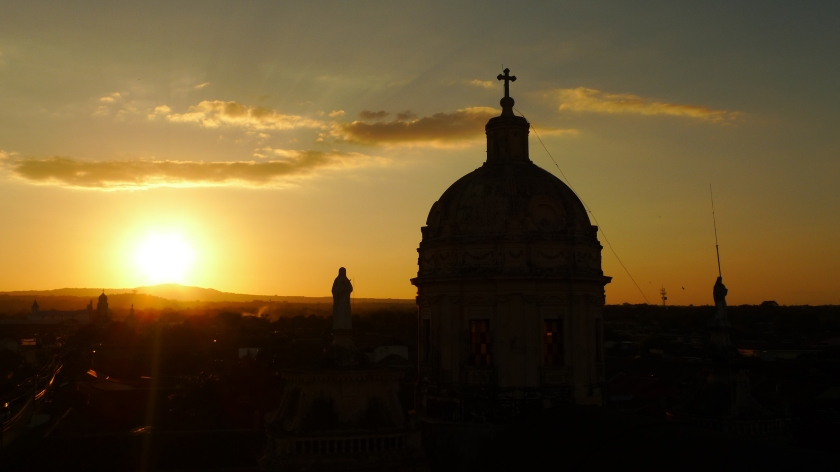 Sunset over the city.

Volcano Conception, smoking away on the  Ometepe island which is made up of two volcanos. 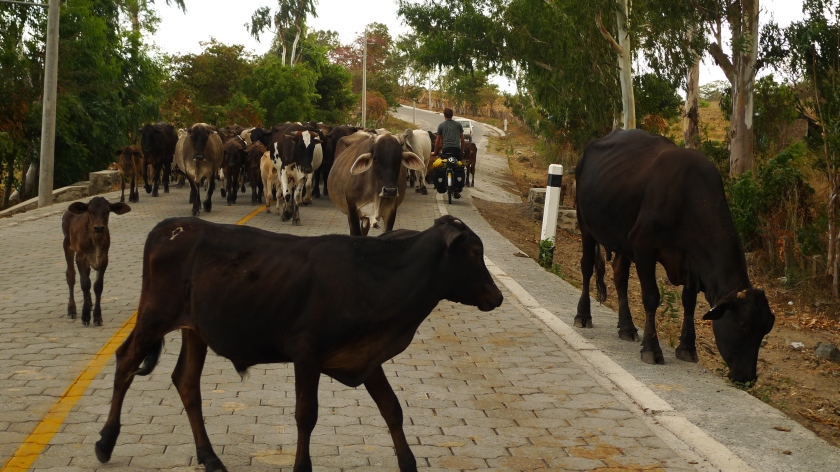 Making our way through island traffic. 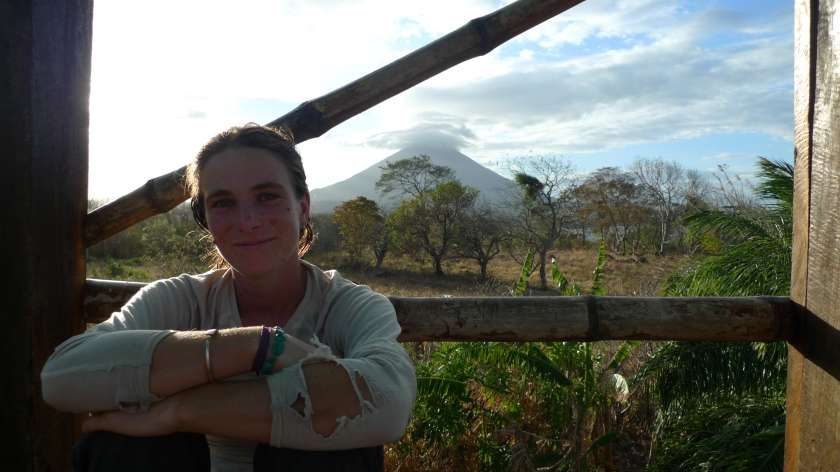 Enjoying the sunset at the lookout tower on Finca Zopilote, an organic farm where we camped for a few days.

Russ happy to be slack lining for the first time in months. 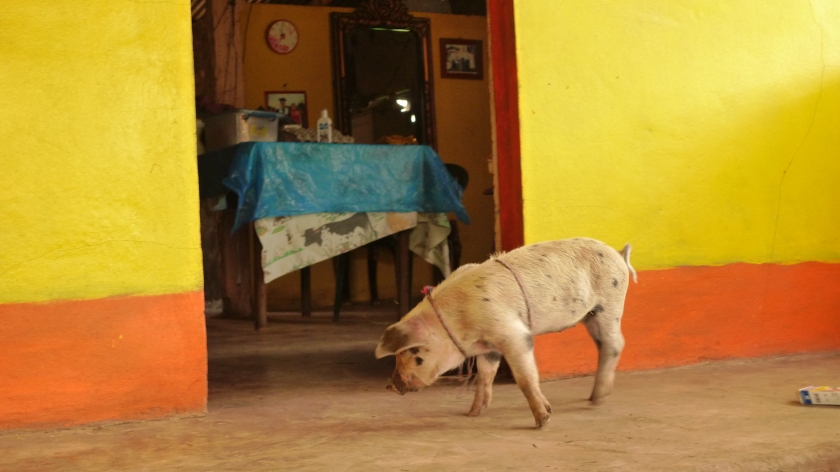 The Comedor Santa Cruz, a really good restaurant with plenty of entertainment, chickens and pigs running around, kittens curling up in your lap and even….

a monkey jumping onto our table!

The pizza oven at Zopilote. We also had lovely fresh bread here with homemade jams, peanut butter and Nutella! 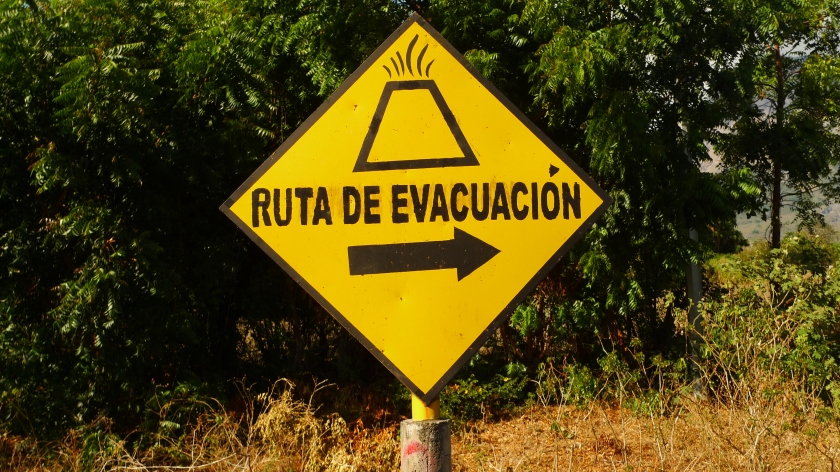 The island has such a lovely laid back feel to it, when you see these signs it really brings it home to you that you are right below a powerful force of nature.

We left the cooler hills of El Salvador and headed for the hot hot coast, where even the sea is warm! However with early starts and afternoons hiding in the shade we were soon crossing the border into Honduras, our border crossing into El Salvador had been very straight forward and we were through in minutes, entering and  leaving Honduras was a bit more chaotic, (mainly due to the lack of any signs of where to go) arriving at 7am we were surprised to see a long queue but it moved fast and we crossed over, paid our fee for Honduras and after a friendly chat with the police about the countries we have visited we were on our way again.

Watching the football! We can always tell when a game is on, anywhere with a TV has a crowd. 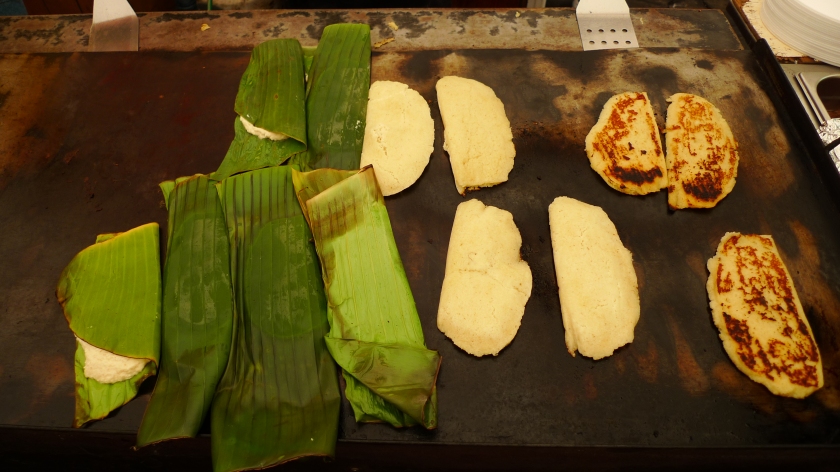 We were in Juayua for the weekly food fair, with Iguana, guinea pig and frogs on the menu, we went for this veggie option of riguas con queso, a corn dough cooked in banana leaves and delicious elotes locos (crazy corn), corn on the cob covered in cheese and mustard.

The Salvadorian way of transporting logs, its funny when you are going downhill and a go-kart of logs goes whizzing by! 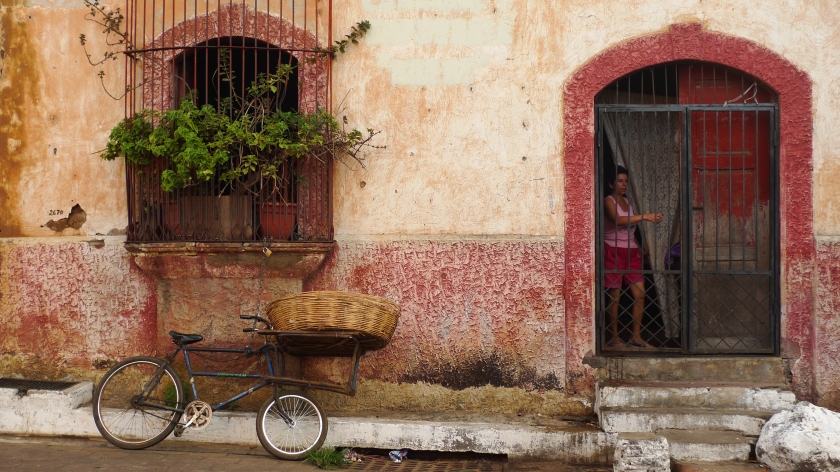 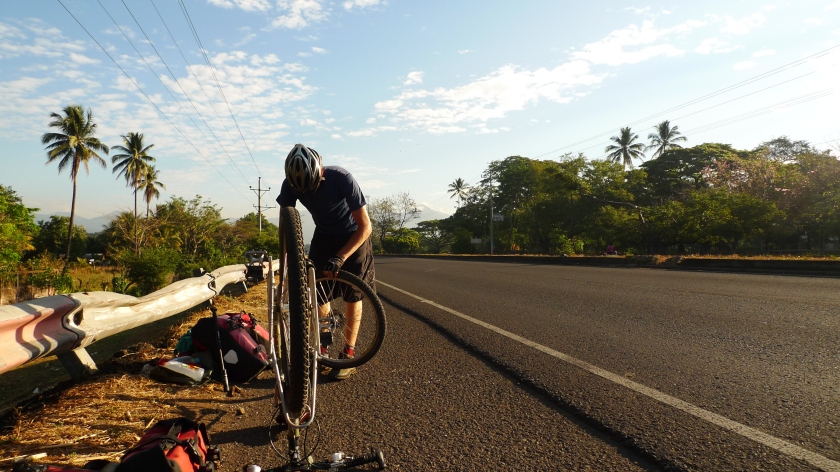 A day of punctures, this was the first of three!

Playa El Zonte. We had a lovely few days here playing in the waves.

Hot hot days, on the way to Honduras. 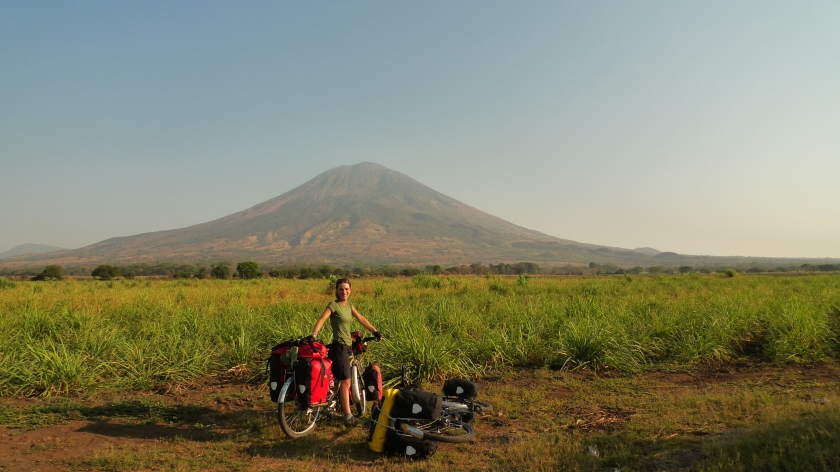 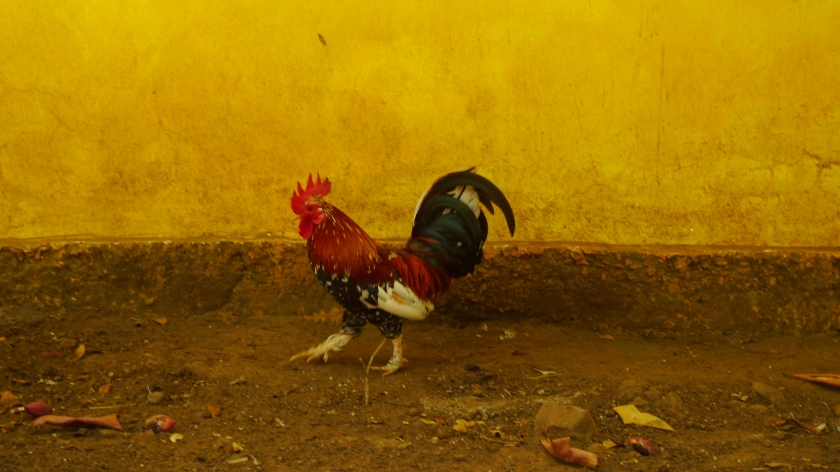 Our morning alarm call, pretty much everywhere we stay! 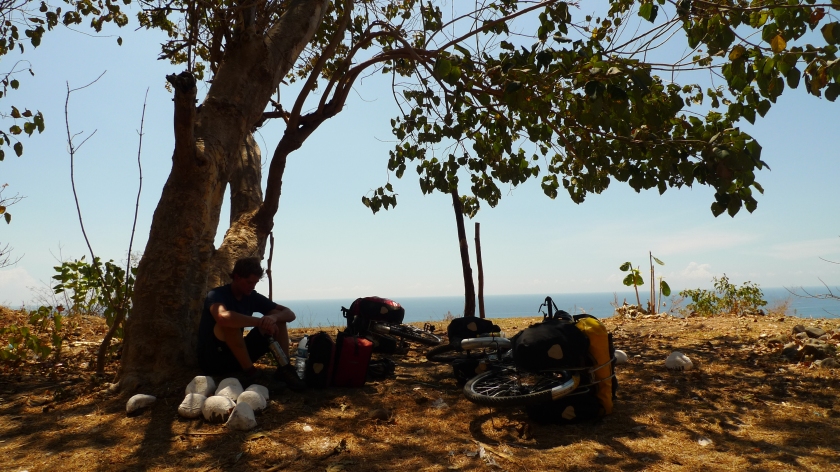 Wonderful shade and a sea breeze.

Crossing borders, the road to Honduras.

Times change slowly here, we pass loads of ox and horse draw carriages carrying wood, people and pretty much anything.

Typical home in Honduras, although we only spent two days riding through Honduras, we went past lots of little villages with friendly waves and smiles as we cycled by. 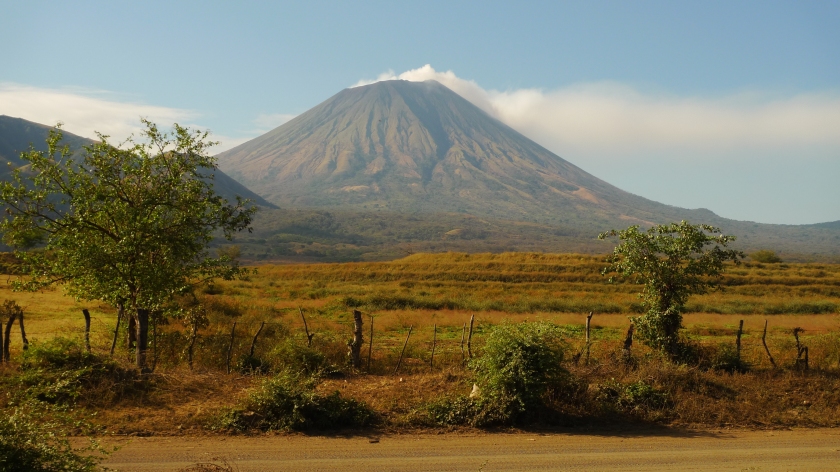 Our first day riding in Nicaragua, cycling past a smoking volcano, with great tailwinds, it doesn’t get much better. 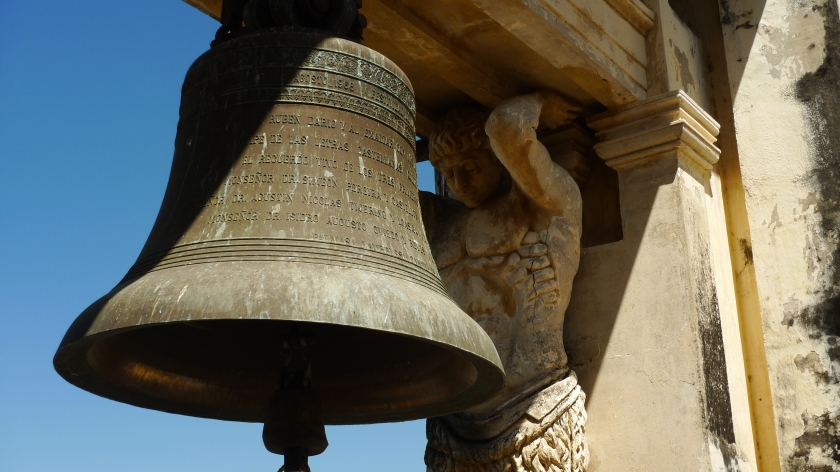 The view across Leon, from the cathedral roof.