Unfortunately this summer we didn’t have the chance to do a trip on the bikes so instead with winter coming we decided to dig out our backpacks and go on a mini adventure to Morocco.  We headed to Gibraltar and then on to Spain and Tarifa to catch the ferry to Tangier.

Off we go! La Linea de la Concepcion. The first town across the border with Gibraltar.

Holiday time! Waiting for the bus to Tarifa.

Calm sea and rainbows as we crossed the Strait of Gibraltar. Luckily when we arrived in Tarifa there was a ferry waiting to leave so a quick sprint through the terminal and we were on our way to Africa!

The ferry arrived in Tangier ville port and within a few minutes you find yourself walking up through the medina towards the Petit Socco. 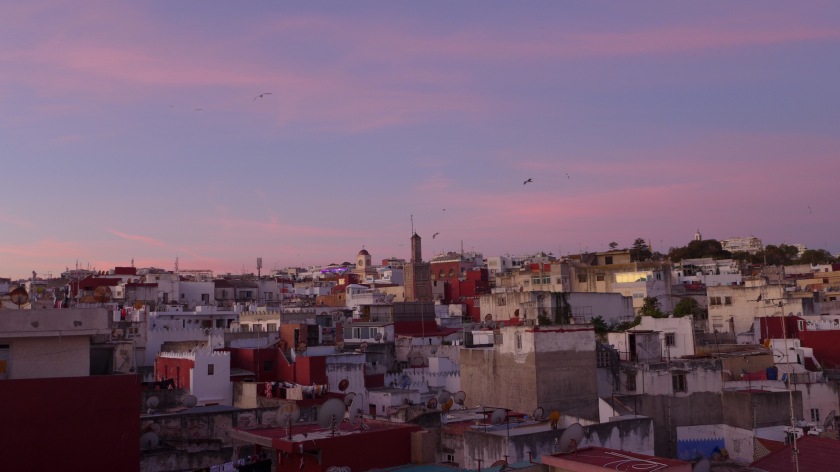 It took us a while to find a place to stay, but in the end we found a lovely little guest house just in time to enjoy the sunset from our roof top…

and a walk through the medina to the Grand Socco.

Up early and on the hunt for breakfast… 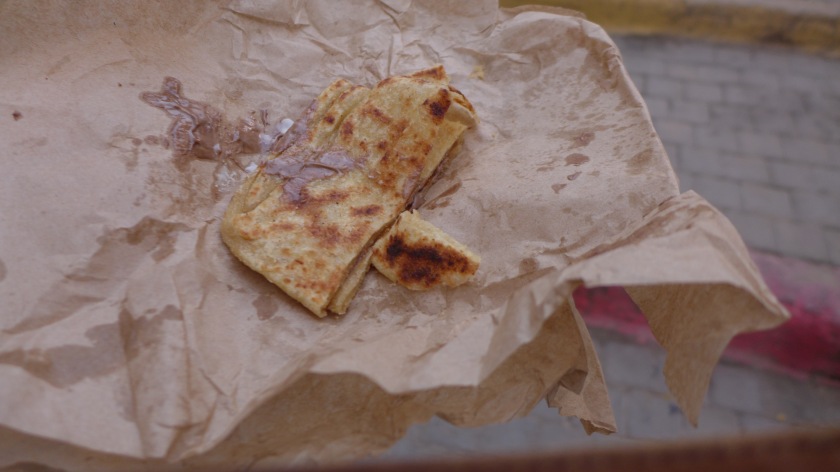 And our favourite find, a pancake like flat bread covered in nutella, folded and cut in slices!

Followed by mint tea at Cafe Tingis as the town wakes up.  As we would be coming back to Tangier at the end of the trip we decided to head to the bus station and catch a bus to Chefchaouen. 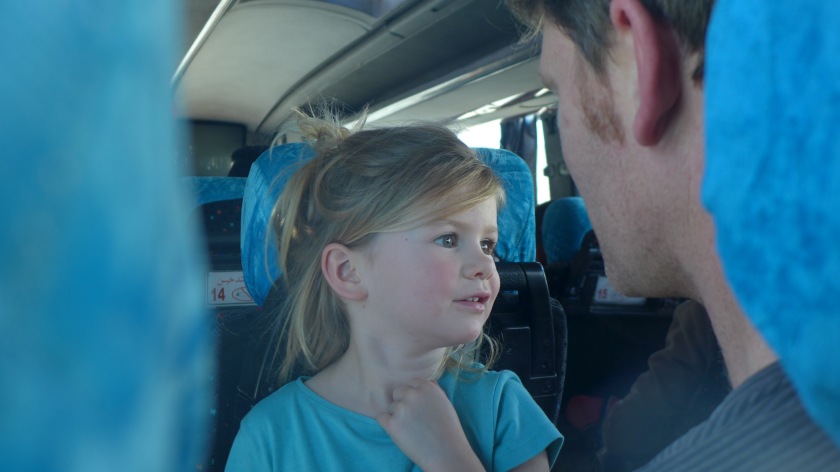 A blue bus on the way to the blue city! 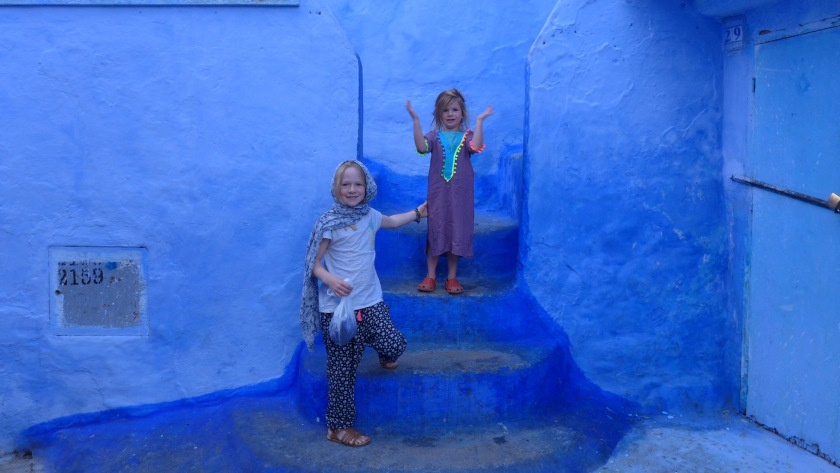 We had come to Chefchaouen when Mia was much younger and had remembered it as peaceful little town, and we were looking forward to coming back. It is still lovely to wander around the old town but it is now very much on the tourist trail. A big difference from that town that had once banned entry to all Christians and before 1920 had only been visited by 3 westerners!

Blue walls full of souvenirs! The girls were in shopping heaven! 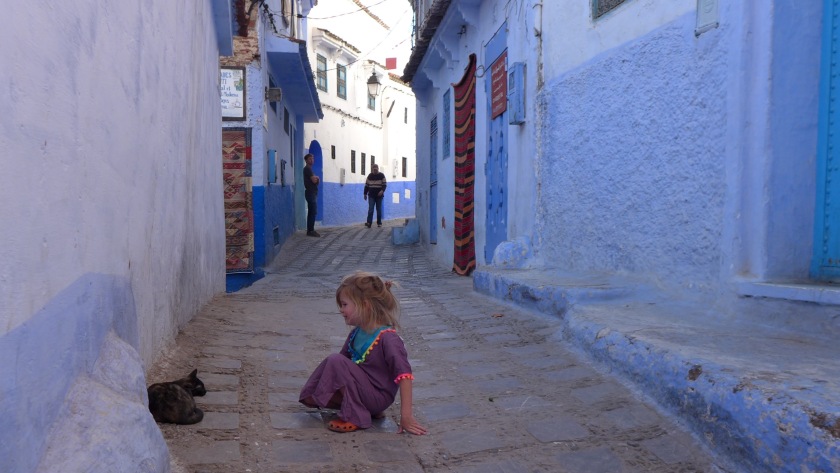 Although it was busy here it was still a pleasure to wander amongst the traffic free streets. 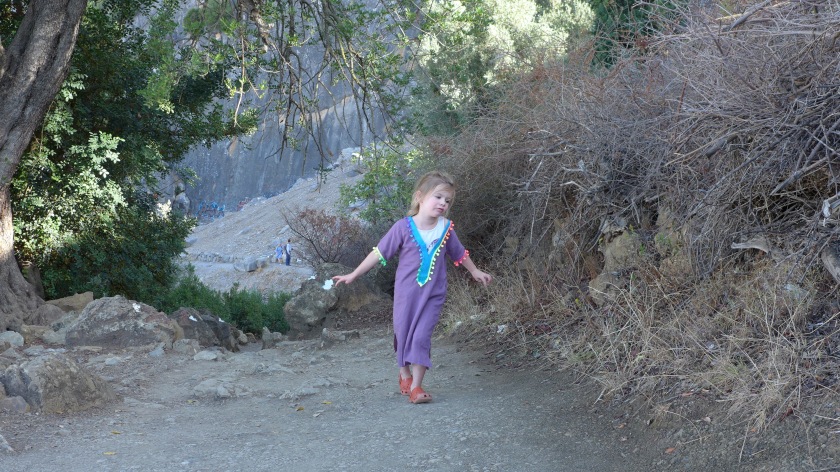 A walk up to the Spanish mosque is rewarded with an amazing view of the town. 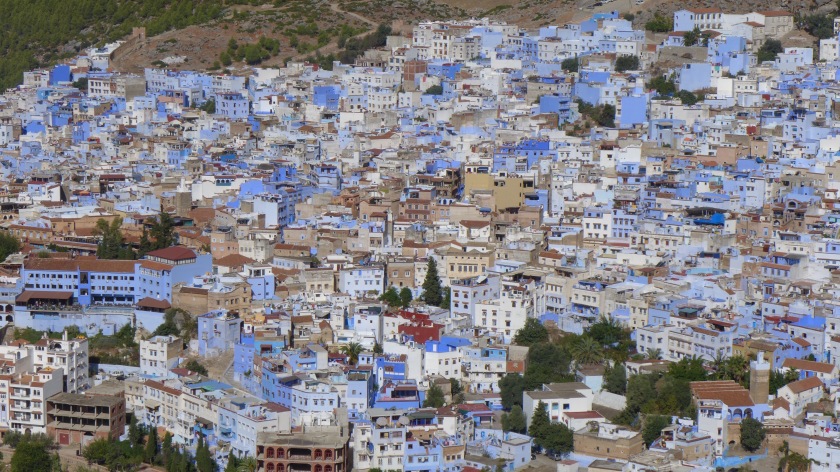 Snack stop after a day exploring! 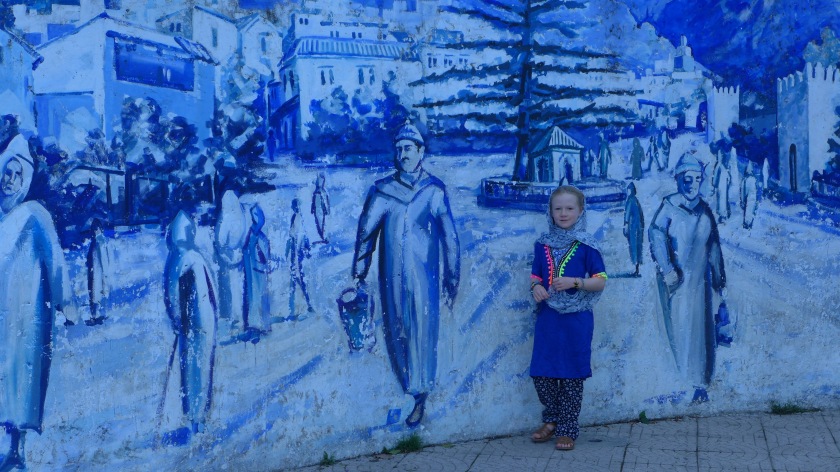 Narrow streets of the old town.

After a couple of lovely days here we had an early start to catch the bus to Fes.

A quiet and misty morning…

then the sun came out! 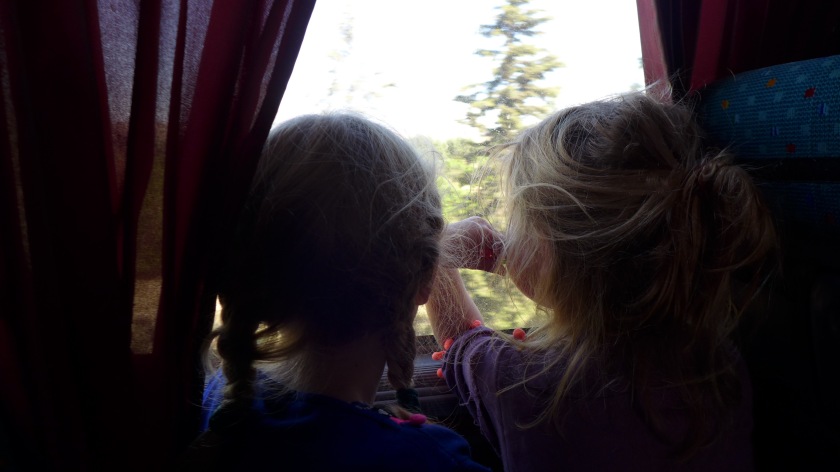 Back on the bus, 4 1/2 hours but luckily drama free. Most of the time was spent counting points for donkey spotting and storks nests… 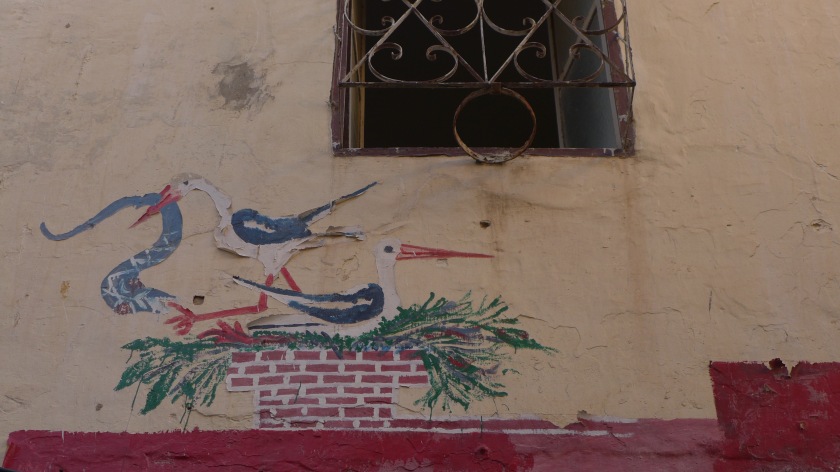 Fes, an overload on the senses! The oldest of Morrocco’s imperial capitals, in parts it feels as if it is suspended in time. Narrow lanes ( we were told there are over 900 streets) like a giant maze, full of  bustle, odours, sights and sounds.. 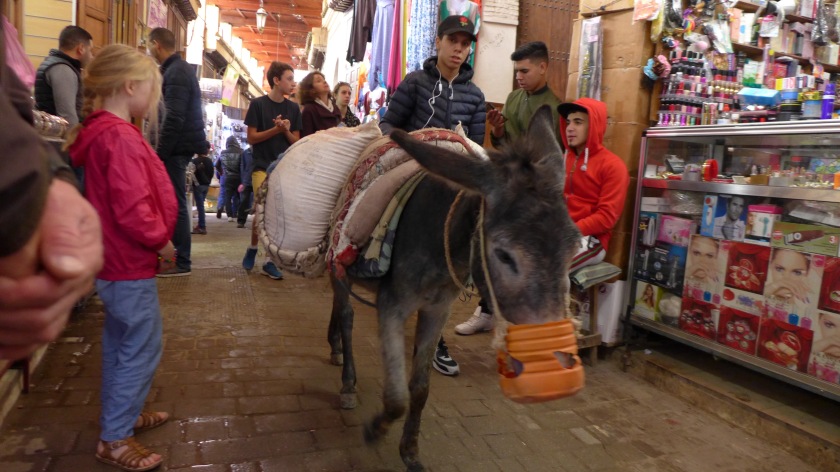 the only traffic you have to jump out of the way of!

Covered markets full of all sorts of delights from olives to… 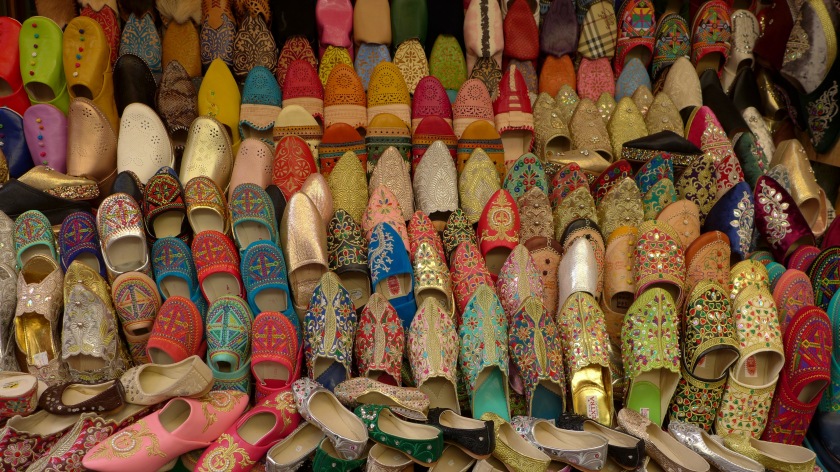 and of course the odd camel head!

The still working leather tanneries are incredible too, barely changed from medieval times. 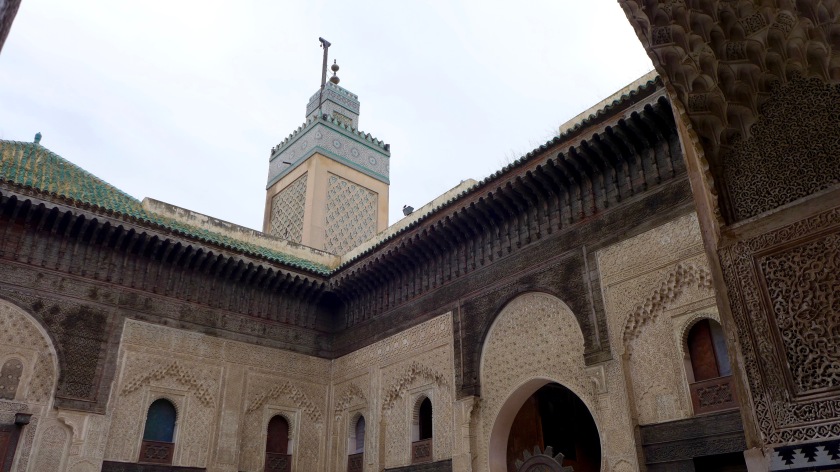 Amongst the madness is calm in the truly beautiful Medersa Bou Inania. 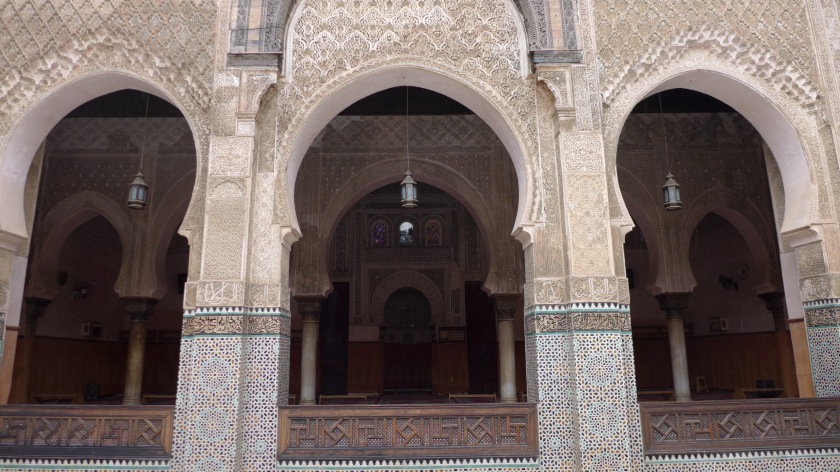 This medersa was built between 1351 and 1357, the last and grandest built by a Merenid sultan. Sultan Adou Inan who was noted for having 325 sons in ten years, deposing his father and committing unusually atrocious murders!  He was advised by the religious leaders to build his medersa on the city’s rubbish dump for redemption of his sins.

When looking up a place to stay in Fes I came across an organisation that arranged homestays with families in the city, I though this would be a perfect chance to get to show the girls what life was like in a moroccan household. However it was not quite as we imagined it was indeed an old family home but it felt like the family had long gone, the house was beautiful but crumbling, and the welcome was far less friendly then we received everyday on the streets. This bed was definitely the high light, unfortunately we were not sleeping in this one, the one we were given had dead cockroaches under the pillows! So after a not so restful night we bid our goodbyes and headed for Meknes! 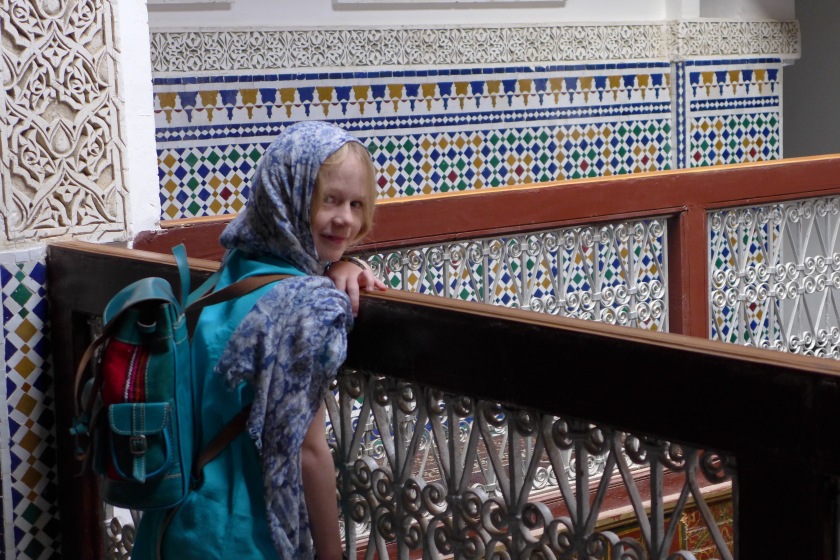 Where we had much better luck finding a beautiful very friendly guest house.

We had a lovely couple of days here, it has a relaxed party like atmosphere. Every evening the square if filled with stalls, entertainers, medicine men and snake charmers….

and for the girls a dream come true…..

a ride around the town in a princess carriage!!

The beautiful Bab Mansour with modern life flowing past it! 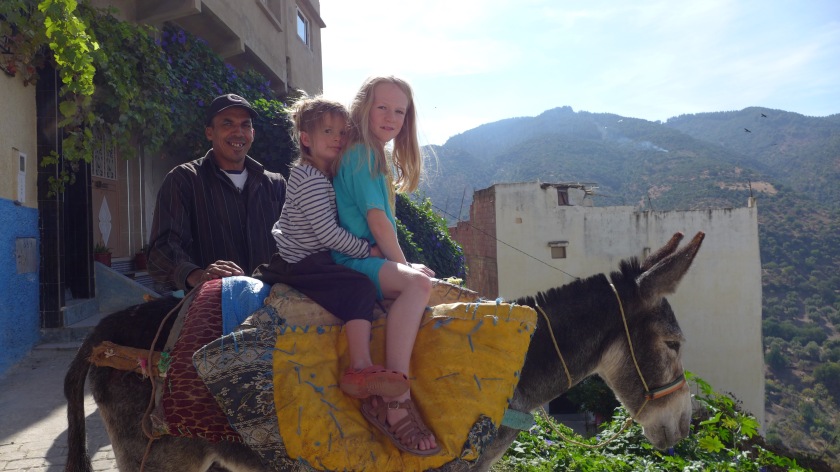 The girls managed to hitch a lift up the 150 steps to the top of town!

Close to Moulay Idriss are the Roman ruins of Volubilis. It was the Roman Empire’s most remote and far flung base and represented the end of the imperial road. Roman rule here only lasted for two centuries, with the Berber tribes hard to conquer. The garrison withdrew in 285 AD. IN later years marble from here was then taken to bulid Moulay Ismail’s Meknes 25km south. 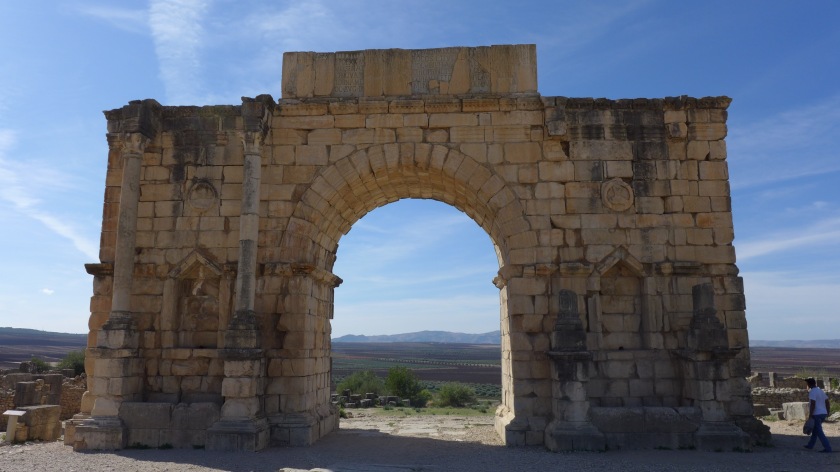 The ruins with the Zerhoune mountains in the distance.

The ruins are impressive but it was sad to find out that Volubilis along with wheat and olives grown in the fertile land here was a chief source of lions for the famous Roman games. Huge numbers of wild animals were taken to Rome and within just two hundred years along with Barbary bears and elephants the lions were pretty much wiped out! 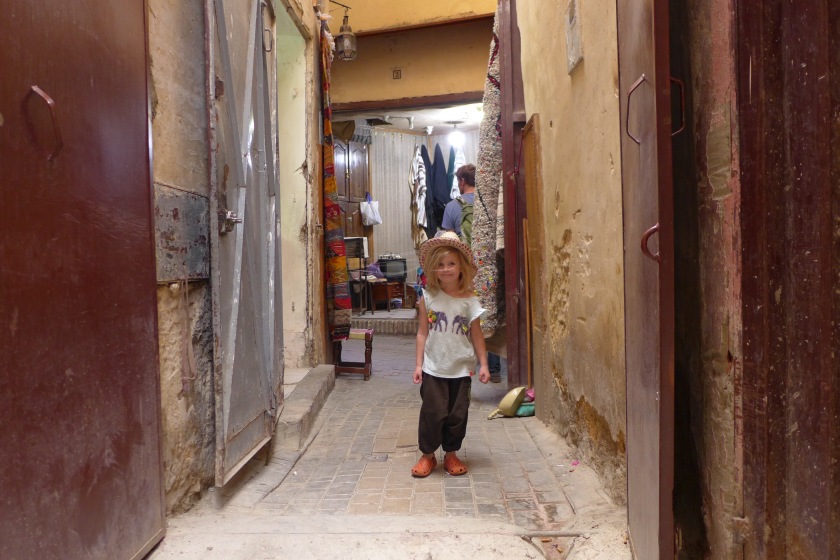 Checking out the flower shops….

And enjoying the lovely fresh fruit. 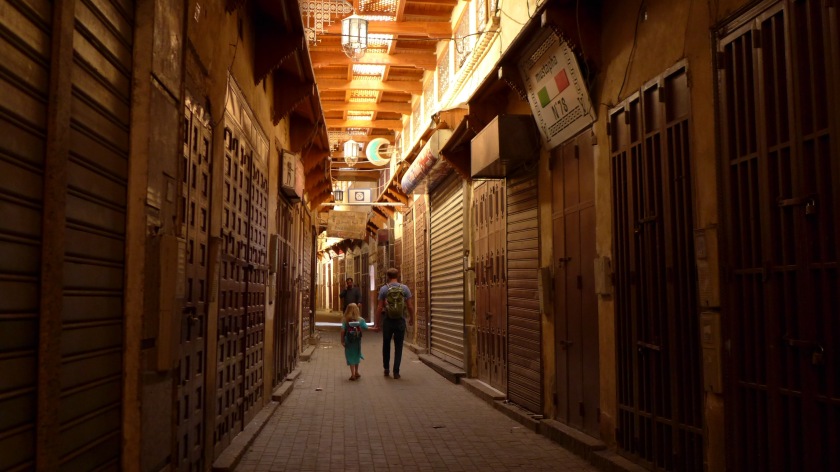 All quiet in the morning when it’s time to leave.

Aboard the train bound for Rabat.

Rabat is an easy place to spend a few days. Big wide streets…. 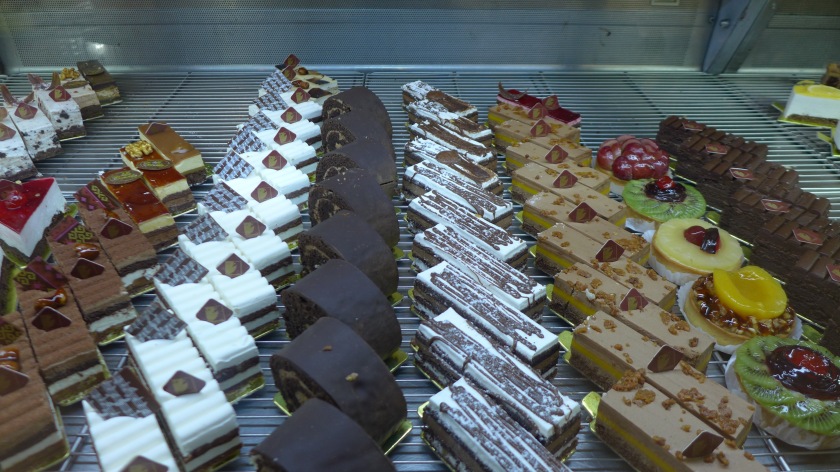 And of course the cakes…. 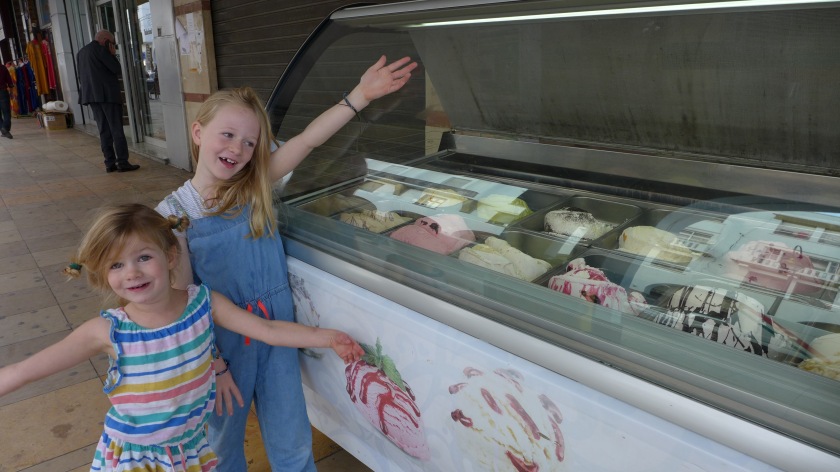 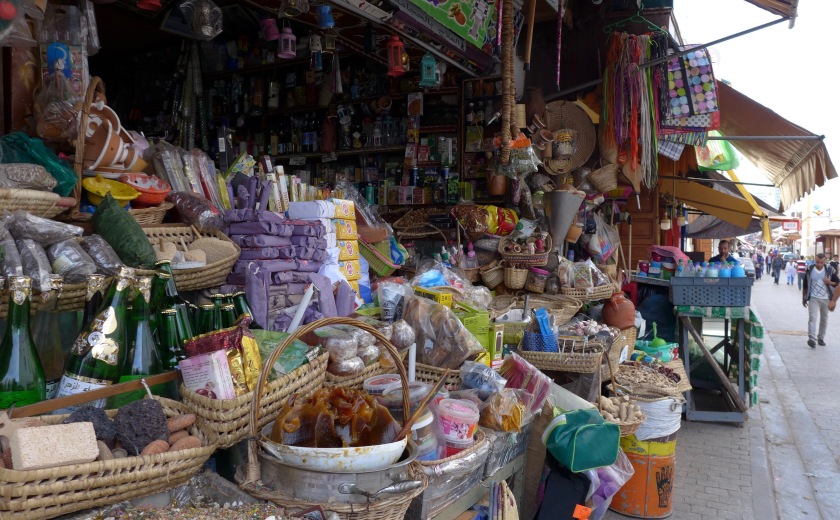 Alongside the wide streets and modern cafes Rabat’s old town is still full of surprises, busy markets and shops full of treasures.

Pippi was desperate to take these home!! 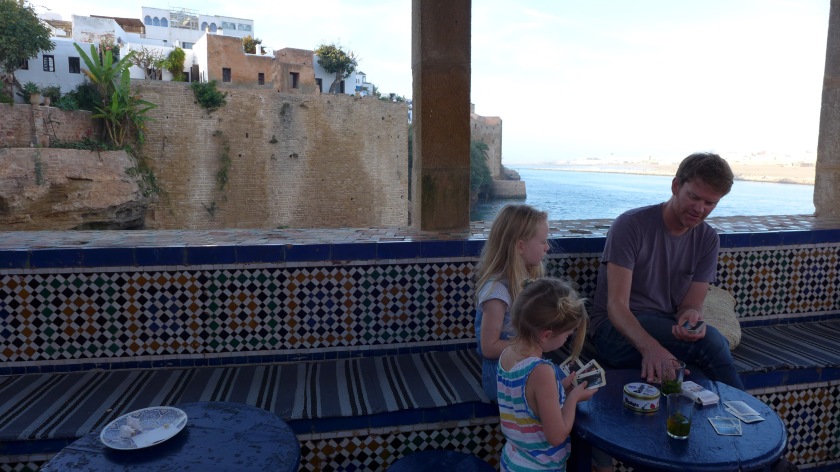 Mint tea and cards in the Kasbah des Oudaias.

The ruins of the Hassan mosque and tower. In 1195 this was designed to be the largest mosque and tallest minaret in the Islamic world. Commissioned by Abu Yusuf Yaqub al Mansur, but after his death in 1199 it was never completed.

It was nearly time for us to head back up to Tangier but one more stop on the way. Waiting for a delayed train to Souk el Arba. Then onto the small costal town of Moulay Bousselham.

Moulay Bousselham. A sleepy out of season holiday town.

The most excitement was the taxi service! 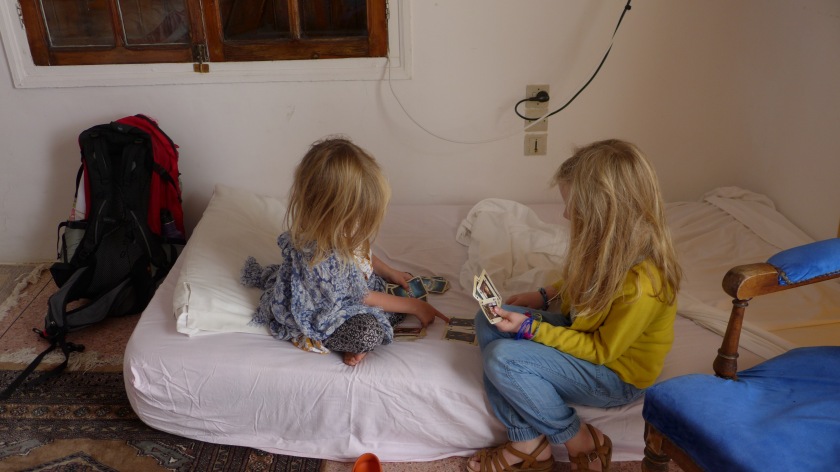 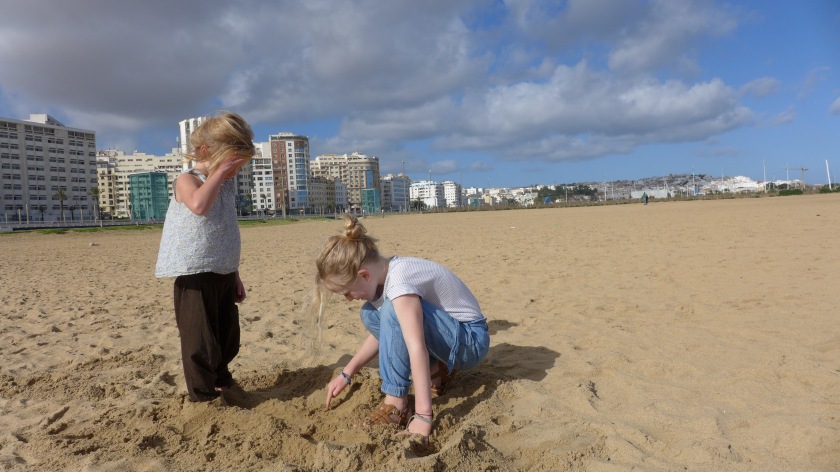 Back in Tangier for a few last days of holiday. Making Pippi a new pair of “pointy elf shoes!”

A much promised camel ride!

A rare family photo, with all the perfect conditions, sunshine in the eyes, wind in your face and a camel stuck between you!

Gazing across at Spain from the ledgendary Cafe Hafa which has been serving mint tea since 1921!

Messing around in the medina! 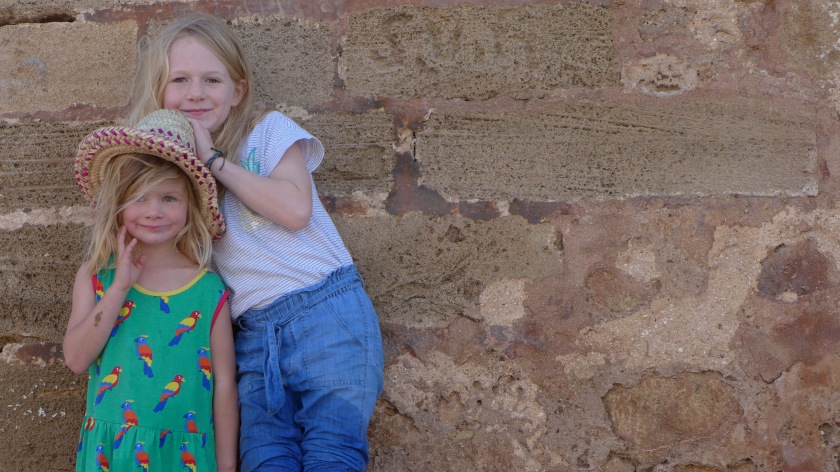 These two really made the holiday…..

although I have never known anyone knock over as many drinks as Pippi!! 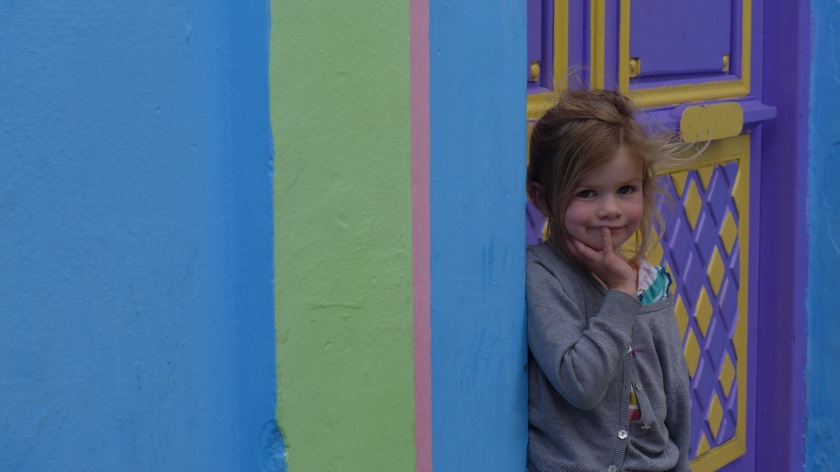 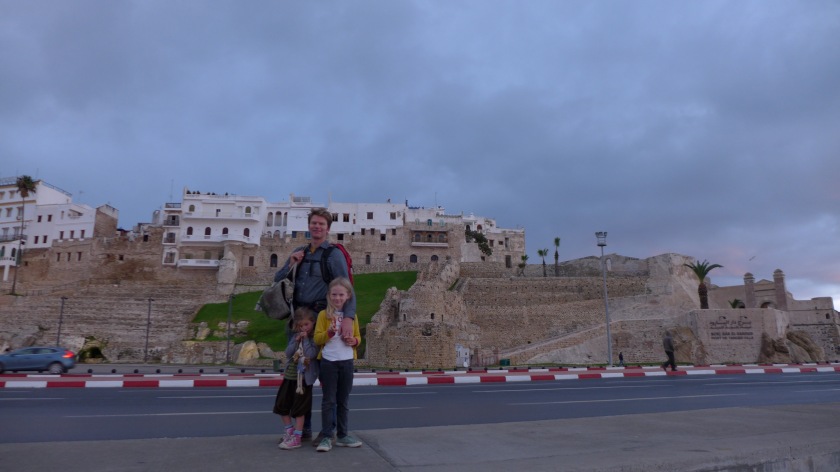 …and time to head home!

2 thoughts on “Morocco with Mighty and Pips.”