After a lovely breakfast of honey pancakes and mint tea, we wandered down to the bus station of Chefchaouen, knowing there was a CTM bus leaving at 1pm we got there early to buy a ticket, but as we arrived a rickety old bus was just leaving with the shouts of “Fez Fez Fez” so we hopped on and payed less than £2 for a four and a half hour journey. It turned out to be more like five and a half hours with the rickety old bus breaking down before we reached Fez but luckily with some space on a passing bus we reached Fez in daylight, which suddenly appeared after miles of dry sunburnt fields and tiny villages of mudbrick houses.

Bab Boujeloud, Fez. The old Medina of Fes el Bali is walled by impressive ramparts and then these beautiful gated entrances, which lead to a town still lost in some distant time.

The only traffic beyond the walls is horses, donkeys and pushcarts. 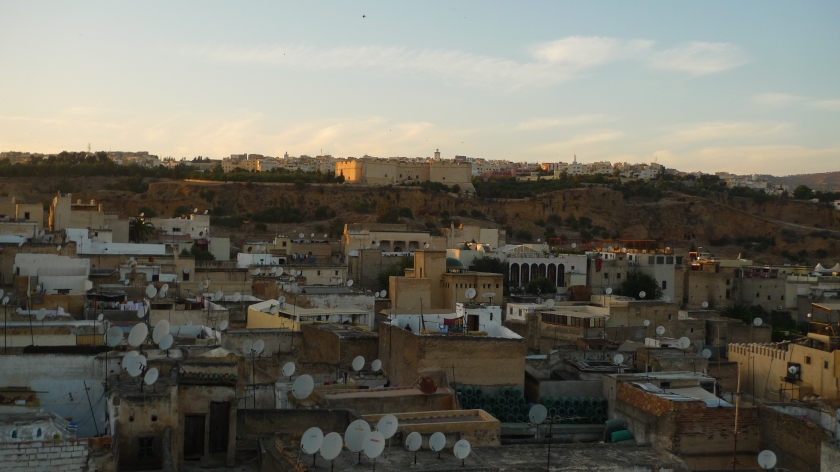 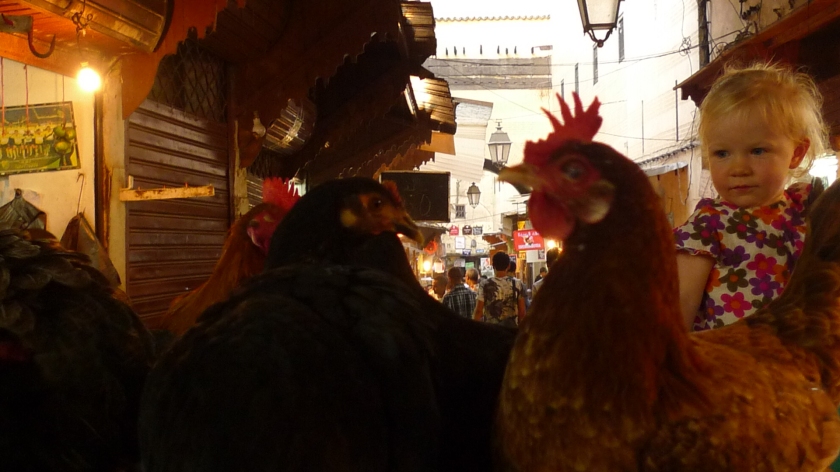 We stayed in the heart of the Medina, so as soon as we walked out of the door we were straight into the market and into a barrage of sounds,  beautiful colours and not so wonderful smells!!! 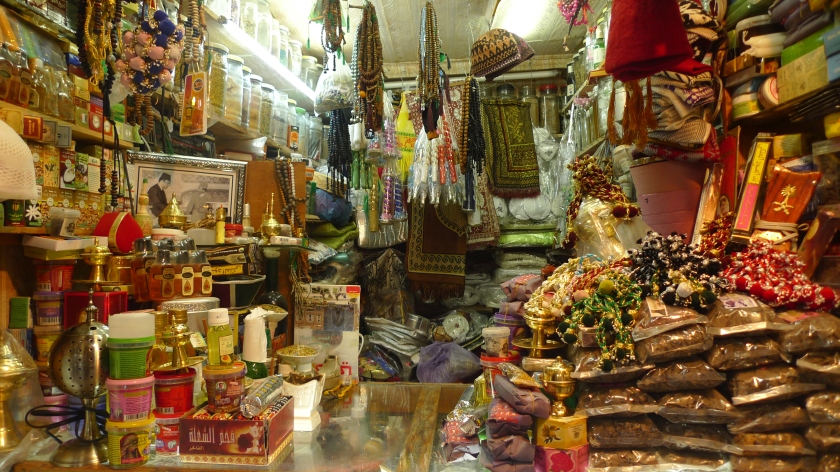 You can buy anything and everything in the market. Shops and stalls are full to the brim. 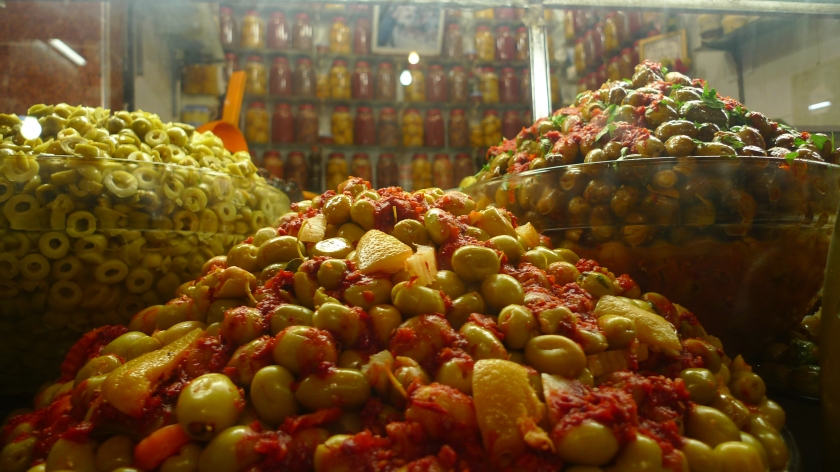 beads in every colour…. 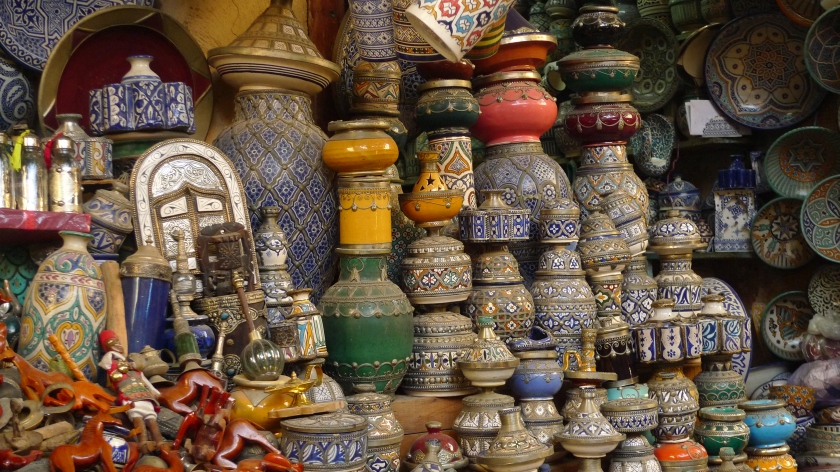 In the heart of the medina you find the Tanneries, which you smell before you see, although vegetable dyes have largely been replaced by chemicals ,  pigeon dung is still used to treat the leather.

Vats of dye and pigeon poo. Little has changed here since the sixteenth century, workers pass down their specific jobs from generation to generation, Hard work and with more chemicals being used high health risks.

Fassi leather from these tanneries is some of the finest leather in the world and founded the city’s wealth from the tenth to nineteenth century. 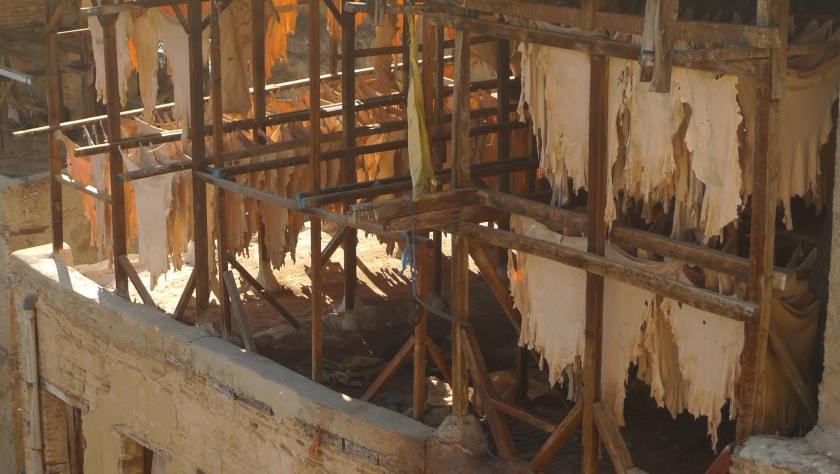 Racks of animal skins drying on the rooftops. 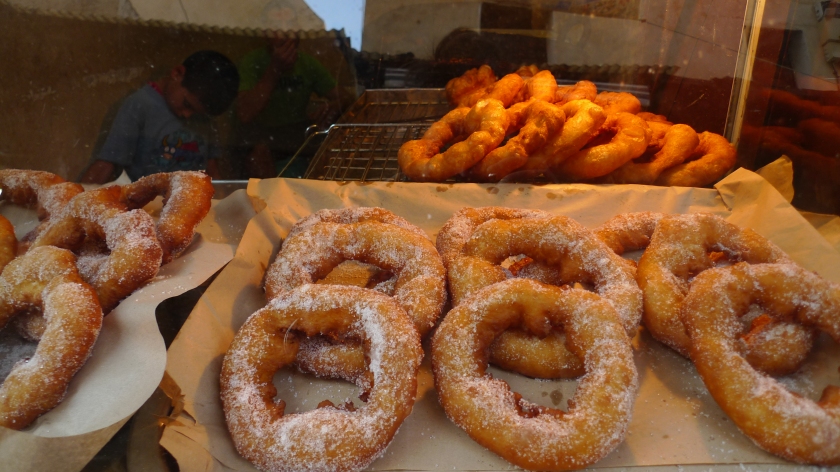 And maybe a donut or two!! 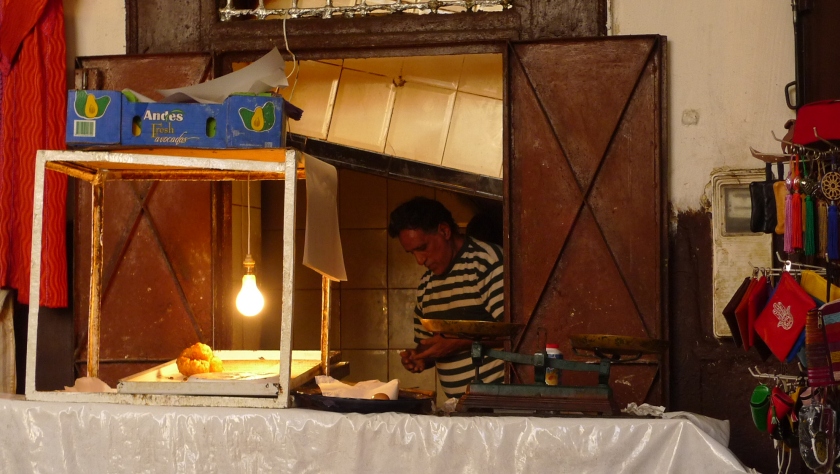 The donut man! It was fascinating to see how fast he made them, and people would buy 5 or six and they would just be threaded onto a piece of twine and taken away. 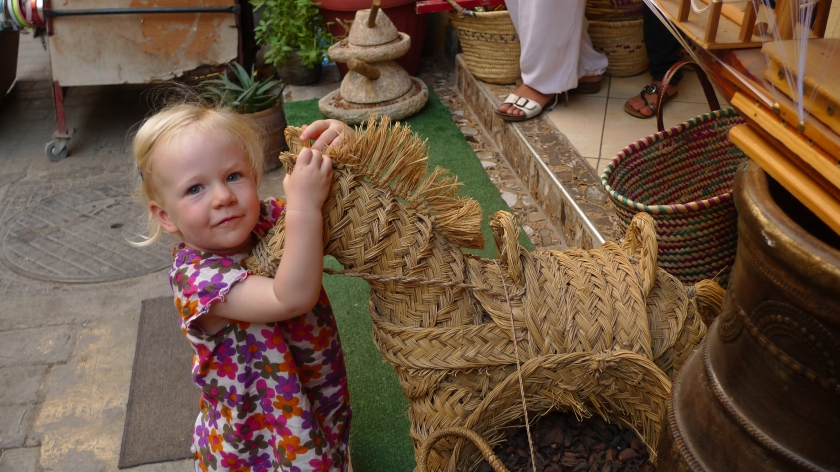 “Please can we take this donkey home?” Once again Mia was like a celebrity, showered in kisses, hugged by everyone from little old ladies to shopkeepers and children on their way home from school. 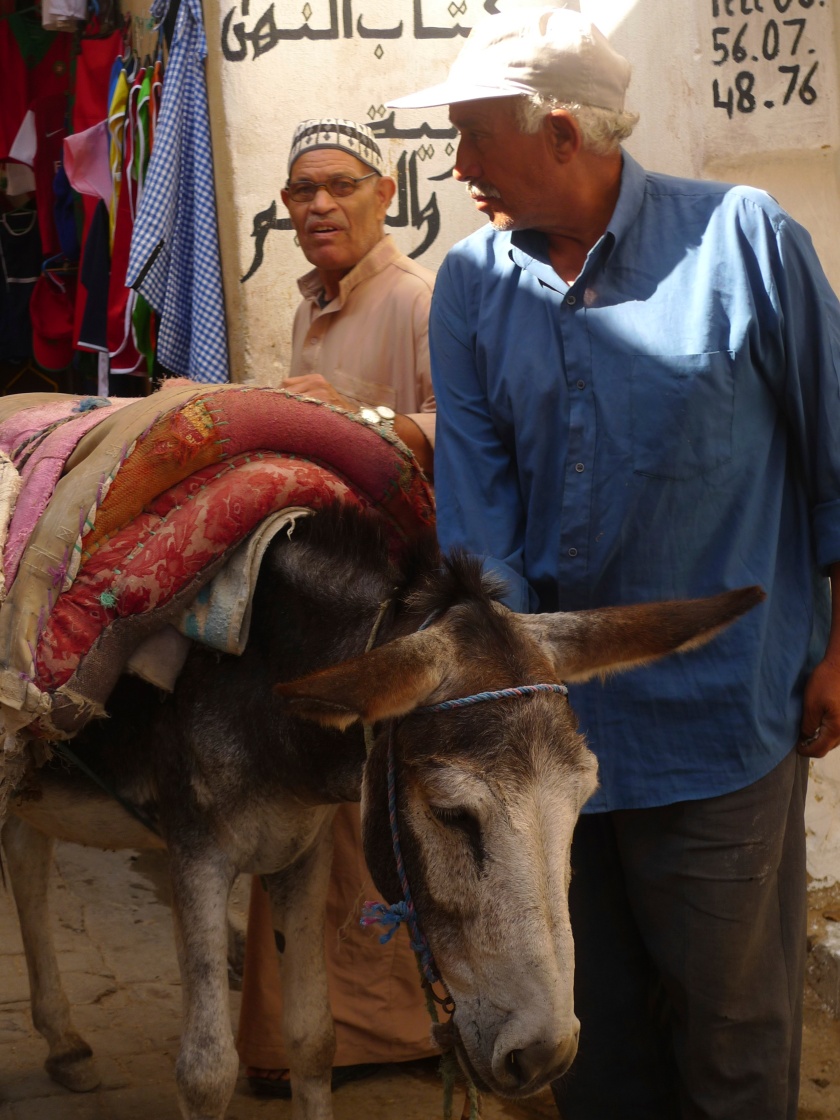 Life in the Medina

Still plenty of cats to chase!!

In the old town you find fancy shops of leather or carpets next to people selling a few bunches of mint, or cupfuls of grain.

The real maze of the old town, the covered souk, once inside you lose all sense of direction!

After a wrong turn, lost in the backstreets, a little disconcerting not having any idea where you are. But luckily there is always someone to point you in the right direction!

Relaxing after a busy morning shopping! In the lovely Riad Hala. Where we spent two very peaceful nights, as soon as you enter into the courtyard the noise of the streets is gone and it’s like an oasis of calm! 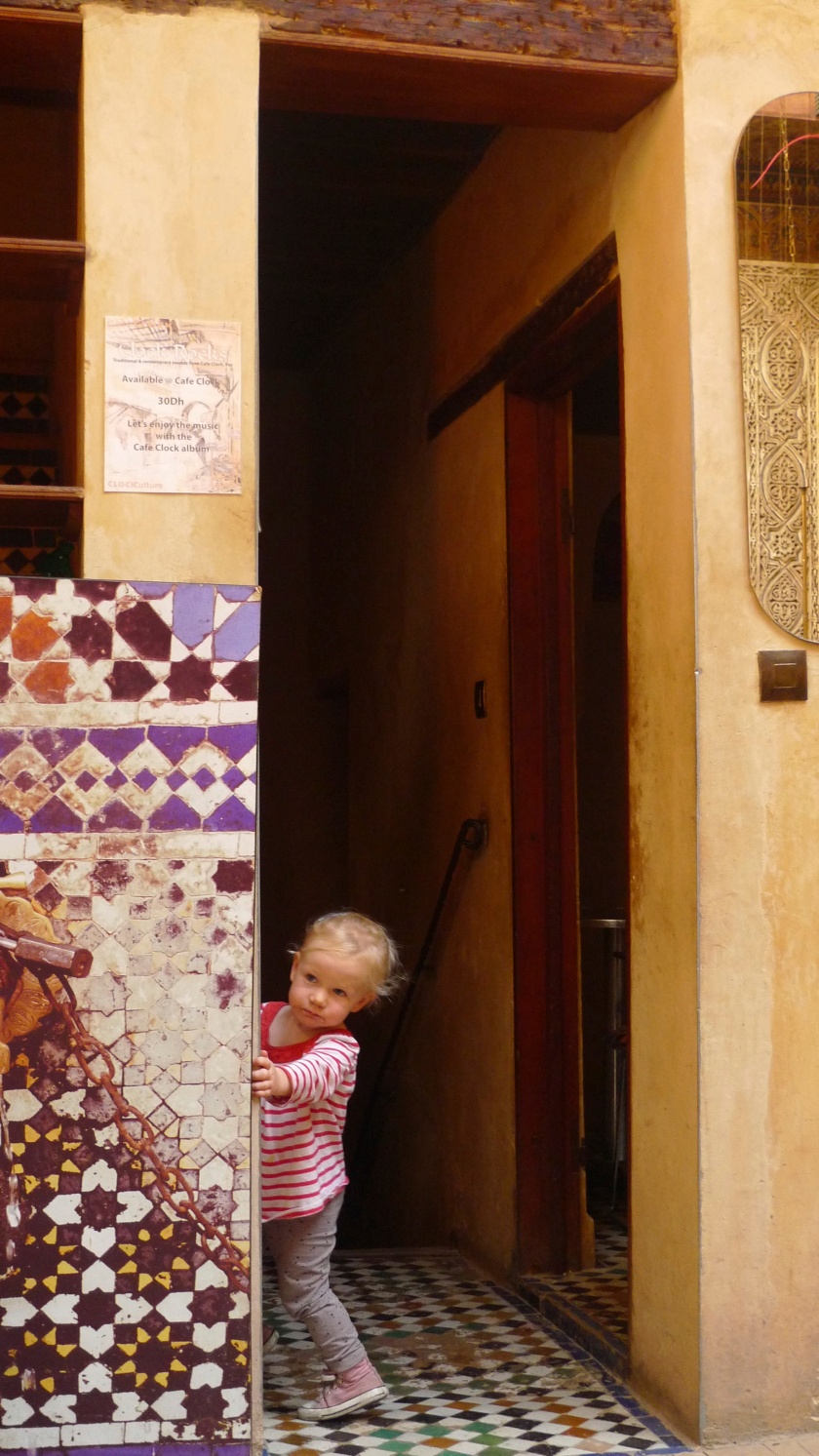 Playing Hide and Seek in the the Cafe Clock. Another good place when you need a break from the busy streets. With really delicious food on the menu! 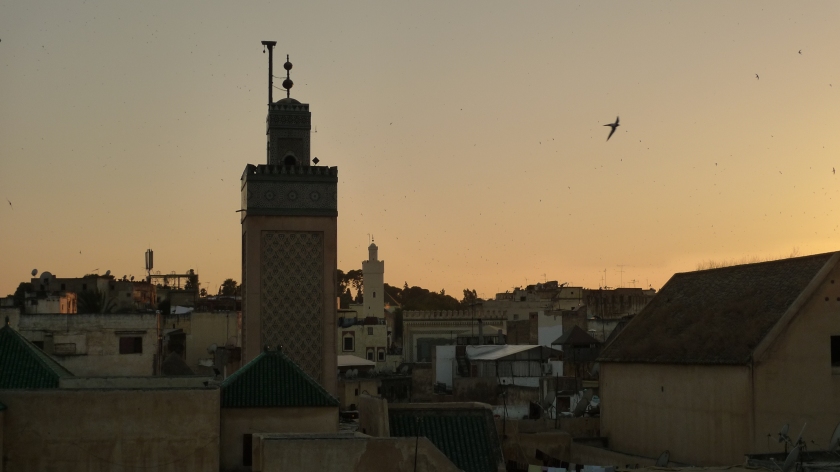 On the rooftop of the guest house, with five mosques a stones throw away, the call to prayer was incredible. In Mia’s words “that man up tower singing”!

We really enjoyed Fes, it is busy but without any cars it is easy to walk around, and you really do feel like you are lost in another world. 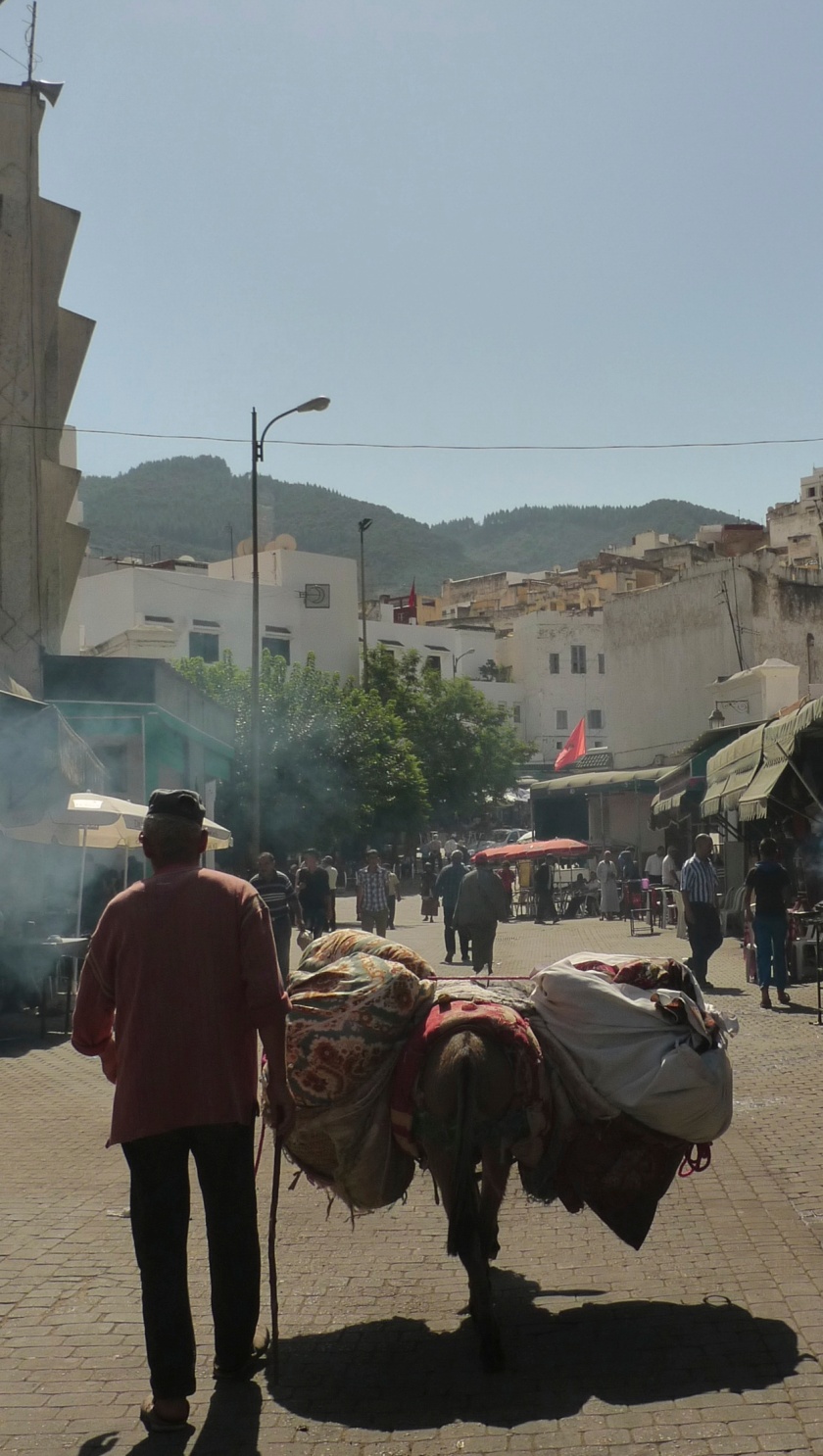 The next stage of travel was by rail we were not sure what to expect but the train was great, it was simple to buy tickets for the next train and it was just a short ride, 40mins to Meknes. We were there by 10.30am so decided to head to a small town called Moulay Idriss. An important town for pilgrims, as the tomb of Morocco’s most revere saint lies here. A trip to Moulay Idriss is worth a fifth of the hajj to Mecca.

Much to Mia’s delight donkeys are the main transporter of everything from building materials to livestock, she was picked up for a free ride!

Moulay Idriss. Although the shrines here are restricted to Muslims only, and there is little for a tourist to visit, it was a really relaxing place to be and sit and people watch!

This gentleman was so lovely he wanted Mia to ride on his donkey so it would be a lifelong memory of Morocco for her.

From our rooftop. Until recently is was forbidden for non-Muslims to stay overnight in the town but as this ban has now been lifted we stayed in the very welcoming guest house La Colombe Blanche. 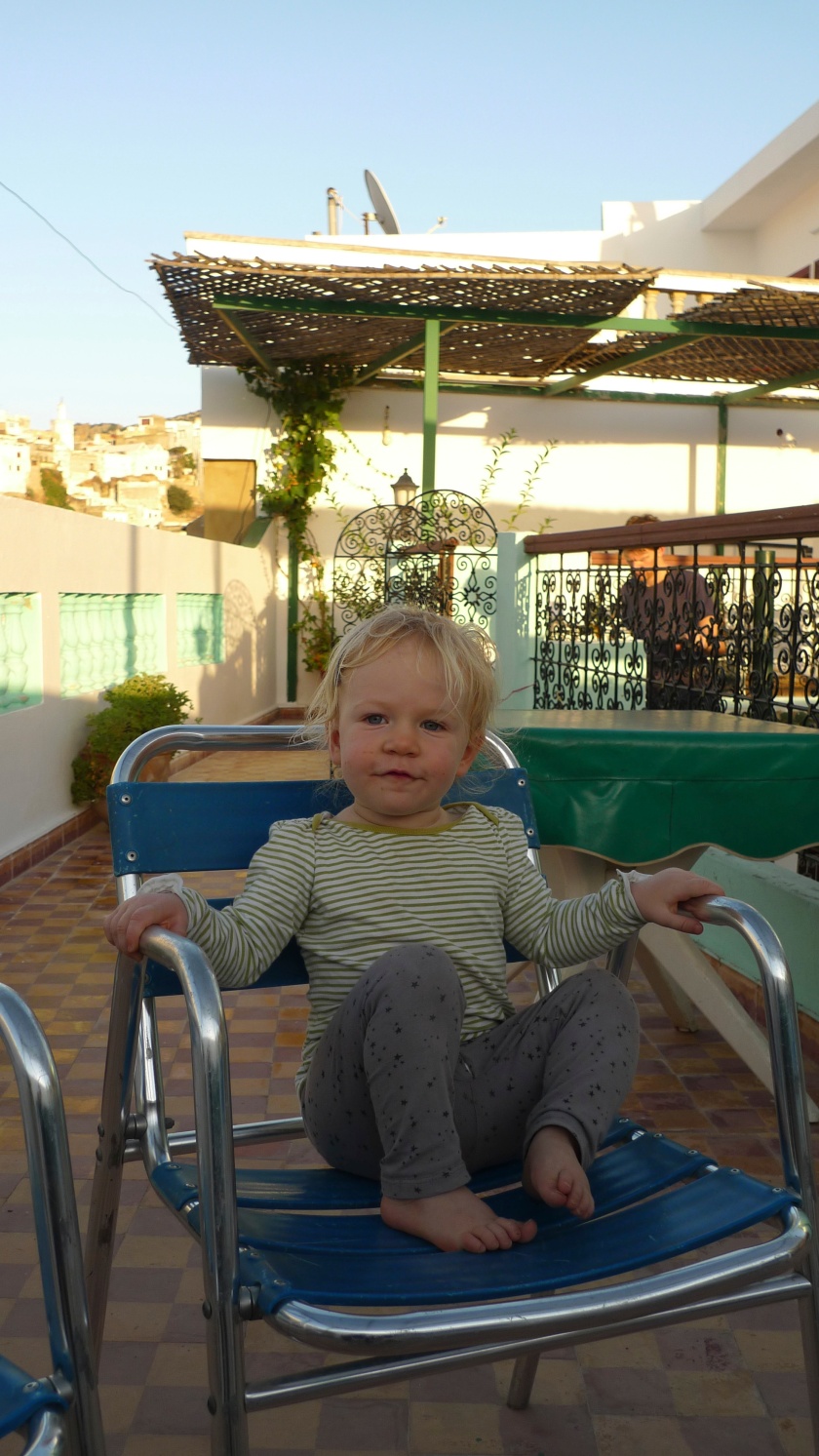 Relaxing on the roof after a hard day of donkey rides!