After a lovely break from big cities we caught the bus back to Meknes, which for a big city has a really relaxed and friendly atmosphere. Normally we find we walk miles to avoid the hassle of arguing with taxi drivers! Meknes, however instantly feels welcoming as the taxi drivers are lovely and really helpful!! The souks are busy but hassle free so once again we were wandering though mountains of spices and sweets and into the maze!

The smell of all the spices is amazing and much more pleasant then the meat sections of the market!

During our trip was the build up to Eid al-Adha, the festival of sacrifice. Families go to the markets to choose and buy a sheep, this caused much entertainment for Mia seeing sheep in cars, on buses and in wheelbarrows!

Enough sightseeing, time for some Peppa pig on daddy’s i-pod!!

Our next stop, the capital Rabat. Showing ted the views from the train. An easy 3 1\2 hour journey right into the centre of town.

The Kasbah des Qudaias, the site of the original ribat and citadel of the Almohad, Merenid and Andalucian towns, it has a strange feeling of being in a village inside a capital city. 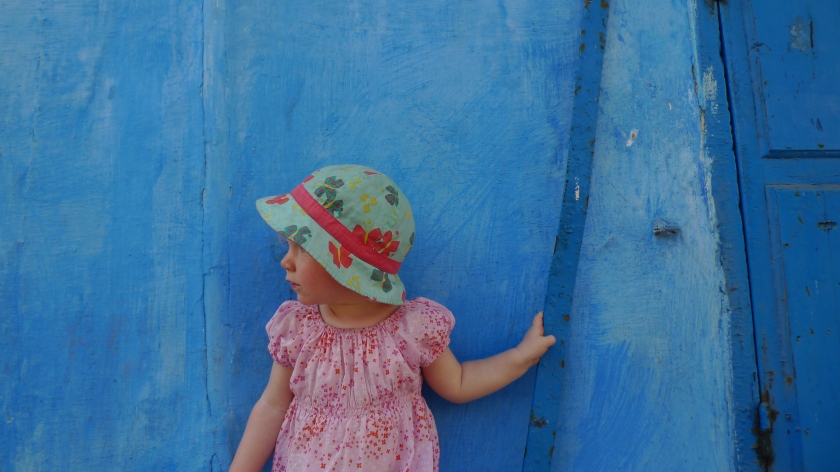 Nice and shady in the Kasbah des Qudaias. 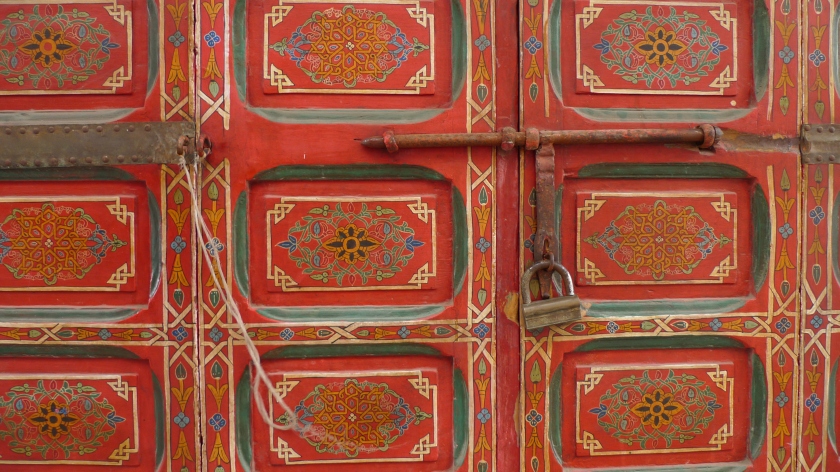 Morocco is all colour and patterns everywhere you look. On doors.. 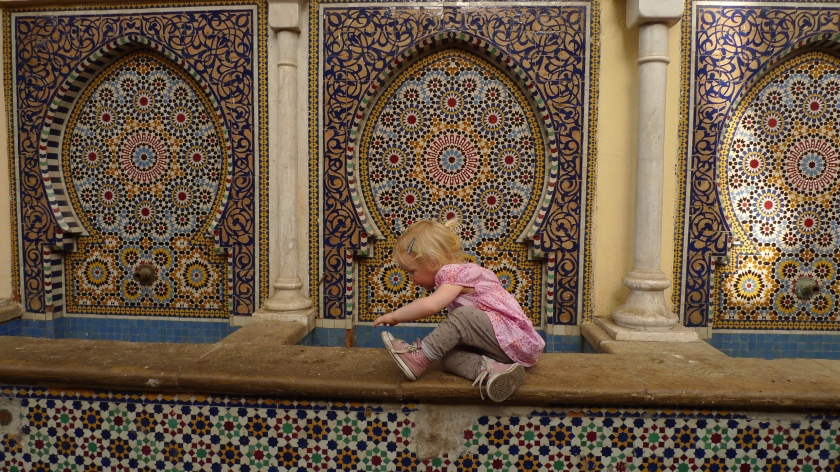 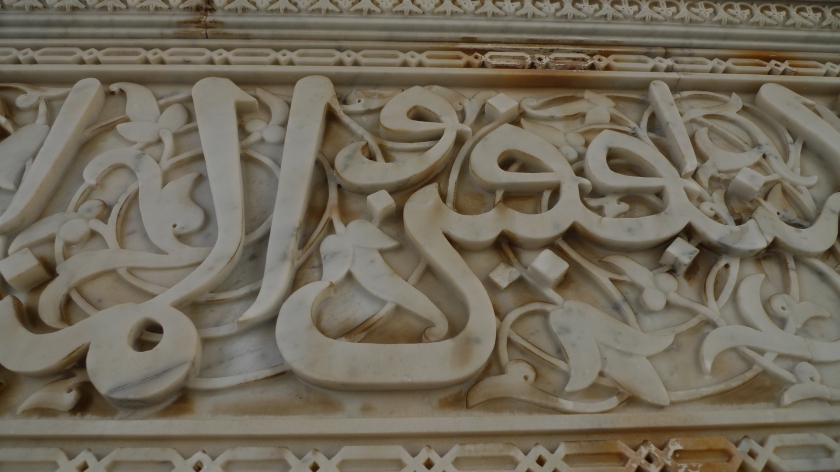 ..and the beautiful patterns in Arabic script.

Hassan Mosque, Rabat. The Mosque was started in 1195 but never completed, the huge minaret can been seen in nearly every view in the city. Had it been comlpeted it would have been the second largest mosque of its time.

After the narrow streets and covered markets of the imperial cities, Rabat felt open and spacious with its big wide avenues. We had only planned to spend one night, just to break up the 8 hour train ride to Marrakech, but we really enjoyed the city with its fantastic cafes and hassle free streets, so we spent an extra day and night and could have easily stayed longer!

Potions of all kinds in a health shop. 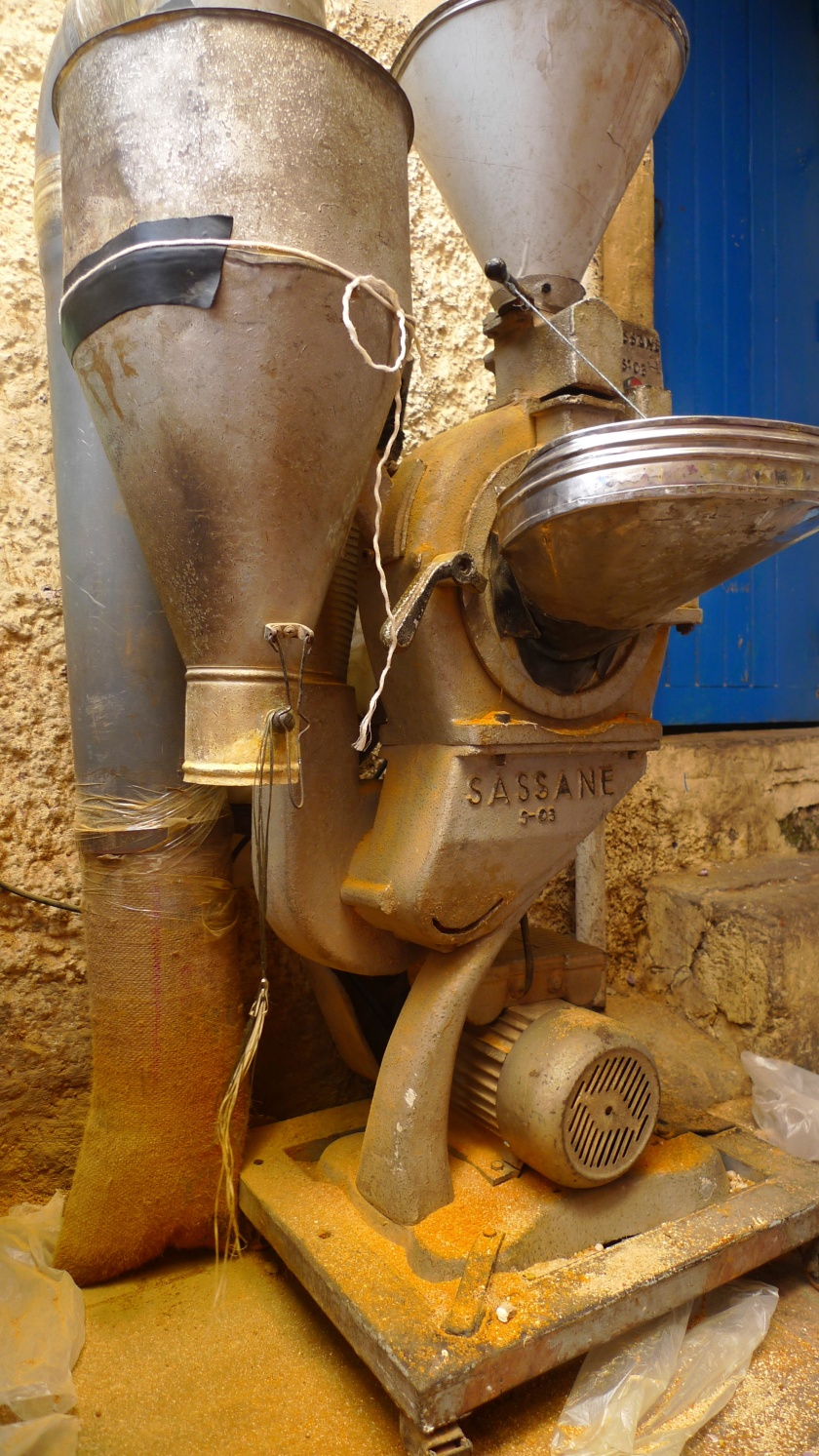 Mint and other wonderful herbs and flowers.

As vegetarians the food in Moroccan can be quite repetitive, lots of veg tagine or veg and cous cous. But with lovely fresh fruit and delicious almond biscuits we didn’t have to resort to snails!! 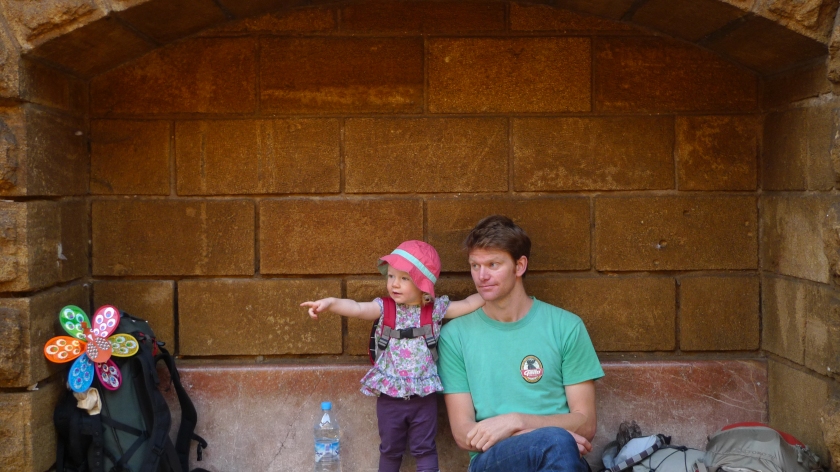 Waiting for the train, Sunday was not the best day to travel with fewer trains they were really busy, but after half an hour we got a seat. A hot five hours to Marrakech but with the help of other passengers Mia was kept amused and entertained! 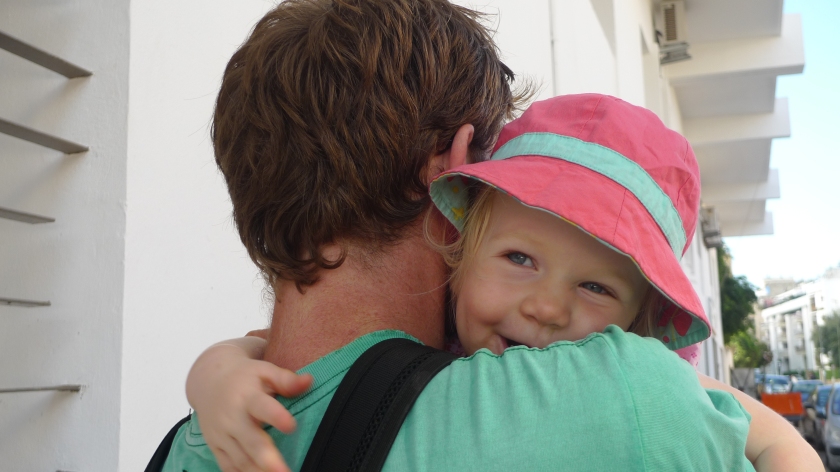 Marrakech, is an overload of the senses, sights smells and sounds. We found a room and after a long day time for some food. Waiting for our supper at one of the many stalls that fill the Djemaa el Fna in the evening.

Another maze of a Medina, Marrakech was much busier with tourists than the other cities and as a result there was a bit more hassle, but Mia was a good distraction. 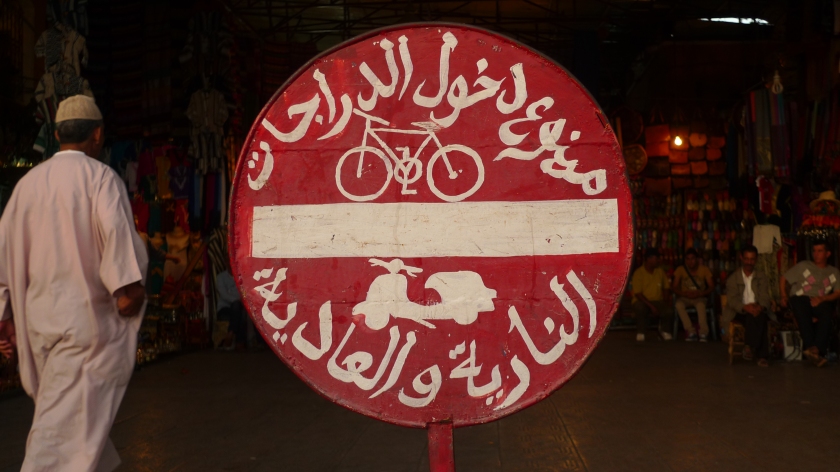 Unfortunately not many people took any notice of these signs and where we had become used to wandering in traffic free zones we were now having to jump out of the way of scooters. With Mia that made it not so enjoyable.

Escaping the medina, the beautiful and peaceful Majorelle Garden, created in the 1920s and 1930s by the French painter Jacques Marjorelle and later owned by the designer Yves Saint Laurent. 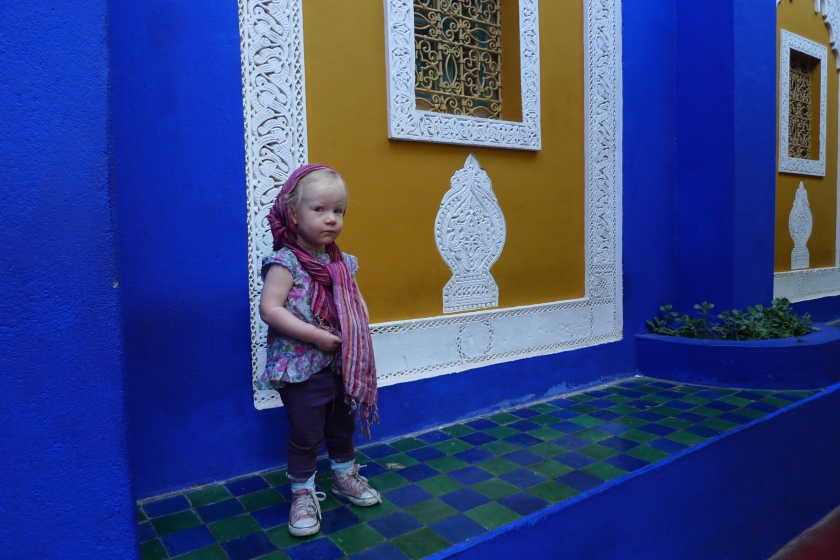 Moroccan colours. Posing in the gardens! 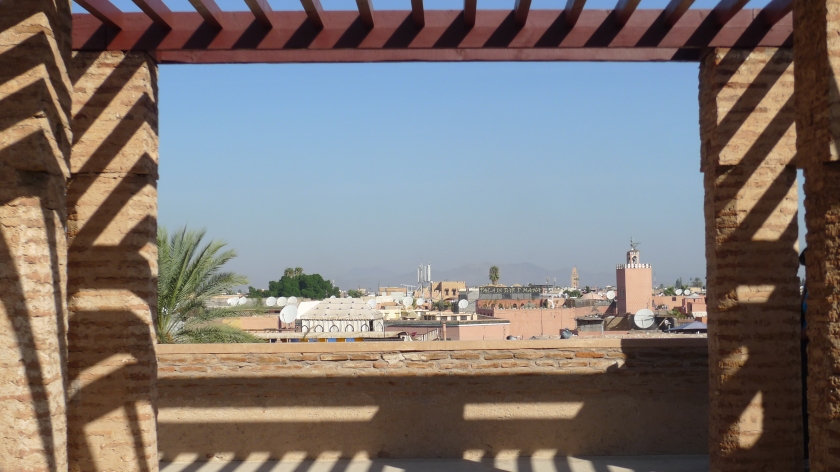 View of the city from  El Badi the ruined palace of Ahmed el Mansour. 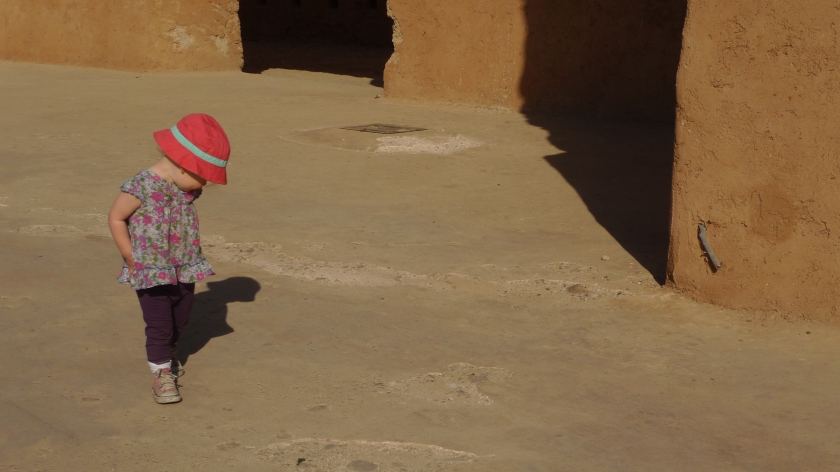 Dancing with her shadow! 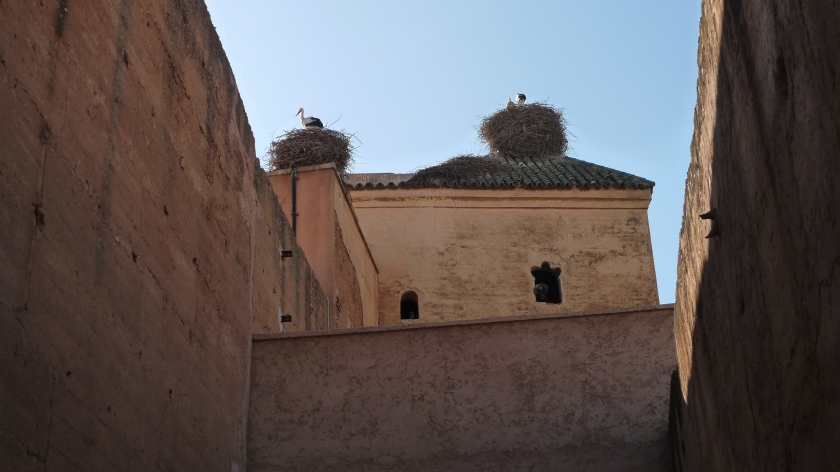 Stocks nesting on the roof of El Badi Palace.

Riding into the square, a princess in her carriage!! Definitley a high light of the holiday for Mia. 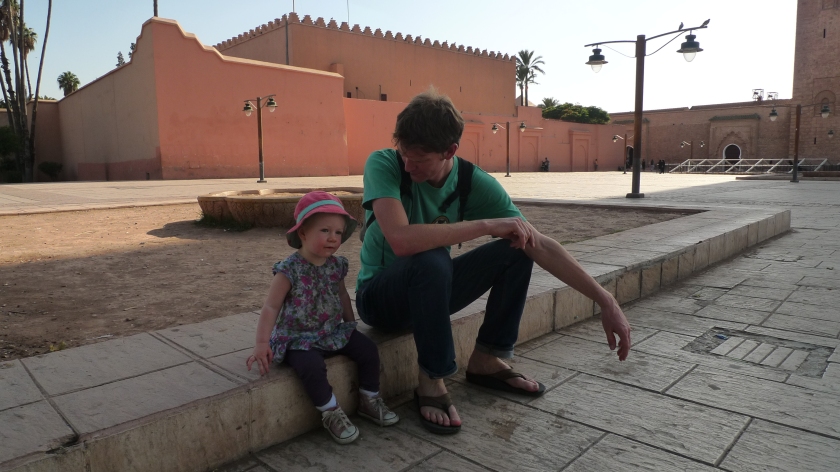 Sitting in precious shade in the heat of the day!

The Djemaa el Fna. This square was made a Unesco site in order to protect the tradition of a need for a place for people to gather and socialise,  a cultural space, for storytellers, musicians, snake charmers  and performers to express themselves. It really is a great place to be as the sun sets, the whole square comes alive.

People watching in the Square.

Listening to the call for prayer from the Koutoubia Minaret, the oldest of the three great Almohad towers, (the others The Hassan Tower in Rabat and the Giralda in Seville) completed around 1150AD.

We have only explored a tiny bit of this great country, A really fun place to travel with a toddler, easy to get around and very friendly and welcoming people.